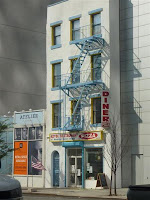 TKnC extends the hand of greeting to Libby with this tale...

It wasn’t supposed to happen this way.

You had everything planned so carefully. You were prepared, you were ready, and yet somehow you ended up with a bullet in your gut, bleeding out onto the gritty carpet of a cheap motel.

You weren’t looking for an affair. You were a good man, you had a wife and a daughter, you were a college professor. You ate organic yogurt and recycled your magazines. You did the crossword puzzle every Sunday. You were not looking to hook up with a 20-something diner waitress named Bunny. And when the affair started, you weren’t looking to fall in love with Bunny. You shouldn’t have wanted what she was—adventurous, exciting, good in bed. You should have been content with what you had, but you had to have more.

So when one day you showed up at Mary’s Diner and someone else was pouring your coffee, you were heartbroken. You hadn’t intended for your wife to notice and ask, you didn’t mean to tell her the truth. You never wanted her to take your daughter and move to New Cairo. These sorts of things didn’t happen to you. You were a good man.

Now you’re not so sure. You heard Bunny was back in town and you bought a gun. She was all you had left to lose. She caused all of this, and maybe when she was gone, really gone, you could finally get over her.

You find Bunny cleaning motel rooms at the Tropical. The years have been good to her, same great figure, same great smile. You take her out, for old times’ sake. You drink a couple glasses of wine, just to get your courage up. You drive back to her motel room and get her on her knees with your gun at the base of her skull. But wine makes you talkative, and you spill this whole long monologue about how much she meant to you. She elbows you in the junk. You drop the pistol. She grabs her own and puts lead in your stomach. You can’t blame her.

You try to beg her to finish the job, but no sound comes out. It’s not like the movies, where a dying man gets a full speech. You roll your head back against the mattress and she bends over to kiss you just like she used to. You smile. You try to say that you love her, but there’s no air in your lungs. She puts the gun to your temple. She can’t pull the trigger fast enough.

BIO:
Libby Cudmore is a regular contributor to Hardboiled magazine and Pop Matters. Her work has appeared in A Twist of Noir, Eastern Standard Crime, the Flash Fiction Offensive, Crime and Suspense, Inertia, the Southern WomenÂ’s Review and Shaking Like a Mountain. She also has stories slated for upcoming issues of Thrilling Detective, PowderBurnFlash, Battered Suitcase and the anthology Quantum Genre on the Planet of the Arts (with Matthew Quinn Martin).
Posted by Author at 12:10