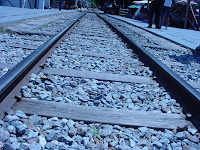 A brief tale of desperate hope and its aftermath....

“It was right on time, nine forty-five, every evening, rain, sleet, snow --- like the mailman, ‘cept the Penterville Express didn’t bring bad news or never ending bills causing more depression. How much could a man take?
The train was relief. Just the sound of its whistle as it rounded the curve; a reassuring sound, a reminder there was hope, an option and it was there night after night.
I could feel the locomotive ride the rail. It was coming out of the curve, headed into the straightaway, a dark long straightaway, but the locomotive’s lantern illuminated the track for quarter of a mile, enough for the engineer to see the two rails run ahead of the train, gathering in a pincher in the distance, yet not far enough to stop the rumbling express within that space.
The locomotive was almost full bore as it eased out of the curve and every car straightened in line with the huge black behemoth that tugged effortlessly at its load. The rumble along my neck increased as I gazed to the stars above. The vibration blurred my vision as it increased. The moon was still rising in the clear night sky to my left, its full brightness beginning to show the entire valley floor and the train galloping across it toward Penterville, and me.
Surprisingly I was calm. Perhaps because I refused to consider my actions, refused to change my endeavor or simply I was too frightened to move, in either case I remained and waited; my body prone on the crushed stone that supported the rails, feet toward the embankment, my neck upon the steel rail with my throat presented to the oncoming steel wheels. My head tilted slightly backwards between both rails, my face upwards towards the heavens.
My eyes could no longer focus; my head trembled from the approaching weight. I sensed the locomotives light had found me, the whistle screeched, begging me to quickly move from the right-of-way or pay the consequences since the engineer was powerless to stop my pending death. I remained steadfast.
My head was now bouncing from the intense weight nearing. I could no longer see the stars, there were several moons, none in focus… then a large darkness covered my face, a rush of wind like a tornado, I heard the screech of the steel wheels against the rails, sparks replaced the stars and moon, bursting around me like cannon shell.
I felt the wetness, smelt the oil and coal of the locomotive --- I felt my form spin in a frenzy from the great turbulence it created as it past my inert form. Then it was gone. Silence returned. The smoke and sparks cleared. My eyes, still open, saw the great Penterville Express now stopped almost half-a-mile away. Forms carrying lanterns were running along the tracks toward me.
I felt failure and would now have to explain my presence on railroad property and more than likely to the authorities why I have attempted, in my depressed state of mind, to end my life in such a manner. Wait, a crumbled mass of clothing off to the side of the rail, a twisted and deformed bundle of used-to-be-flesh, familiar ... mine?
In my final seconds of brain activity, I realized the Penterville Express had successfully completed the task. The engineer and conductor arrived and peered through lantern light; both with a gruesome expression as one would wear upon finding such a hideous sight. My mind ceased with only the regret of not being able to thank the Penterville Express for a quick dispatch. Then, happily, my eyes drooped in death.
BIO:
Henry P. Gravelle is the author of The Igloo Boys, a novella currently under option and entering the whirlwind process of becoming a major motion picture... stay tuned.
www.henrygravelle.com
Posted by Author at 17:39