THE CHALLENGE by James Hilton 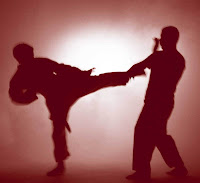 This one takes us back to the height of the Kung Fu boom of the 1970s, and brings it all back in its vivid glory...

“Why are you here?” asked Leo in clipped English. The slight Asian looked the larger American up and down.
“I’ve come to fight the master; to prove that my Karate is stronger than his Kung Fu.”
Leo, dressed in informal Chinese slacks and toggle jacket, pressed a hand against Chuck Palmer’s chest. “You should leave; now, before the master awakens.”
Palmer pushed against Leo’s arm with the full weight of his body. The smaller man’s fingers met with rock hard pectoral muscles.
“Move! I came to fight the master but I’ll squash you first if I have to!” Chuck leaned in a little more and growled long and low to emphasise his point.
“Will the master know who you are?” asked Leo as he stepped aside.
“He should do; I’m the 1974 Pan-American Karate Champion.”
“But the master doesn’t read the sporting magazines, he may not care.”
“I’ll make him care. I’m not leaving without my fight. I’ve flown from Texas all the way here to Hong Kong to test this supposed master of masters out for myself.” Palmer rolled his bull neck and vertebrae cracked like a card players knuckles. “Now, go get the master.”
Chuck Palmer had attained notoriety in the Martial Arts world by several publicity fights. In one bout he fought the Japanese Wrestling champion and knocked him out in seven seconds. In another he fought a wild bull in an arena, the bout ended with the bovine having its neck broken. More recently Palmer was featured on ESPN choking out a grizzly bear with a Judo strangle hold. All bullshit and ballyhoo aside; Chuck Palmer could beat anything he came across. Then he’d heard rumours about an elusive Chinese teacher in Hong Kong. Master Yim could, if the stories were true, kill a man just by thrusting his hand towards his opponent; no contact necessary. Palmer had beaten every shyster, wannabe and Chi-secreting Kung Fu expert he’d ever fought and was sure to add the Illustrious Master Yim to his record of wins.
Leo took a step to the side and allowed Palmer to enter the sheltered courtyard. At the far end of the courtyard sat an elderly Chinese man. He didn’t look up as Palmer made his entrance. He looked to be staring intently at some unseen item on a low table.
“Go on in then if you must,” said Leo, he tapped Palmer’s back and motioned to the centre of the yard. As Chuck stepped in, Leo bolted the door behind him.
“Last chance; are you serious about your challenge?”
“Deadly serious!” Palmer rumbled in his southern drawl.
“You may wish to limber yourself for the challenge…”
“Huh,” grunted Chuck but he moved into a Karate Kata anyway. Palmer’s punches, kicks and blocks snapped into the air like pistol shots. His speed was blinding and his skill in the combat arts was far above the rank and file of the black belt world. A bestial roar ended the Kata as he performed a full Kiai, the terrifying warrior’s spirit shout made famous by the Samurai of Japan.
Palmer stooped and snatched up a large rock from the ground. The first knife hand strike cracked the rock; the second one sent two equal halves toppling to the floor.
Sweat beaded on his forehead, posed in a full squatting horse stance, he declared, “I’m ready!”
“To Die?” asked Leo.
Palmer laughed, “I’m kind of hard to kill,”
“Fool, you’re dead already!”
Then it happened, a ripple of hitherto unfelt energy coursed a complex path through his nervous system and more intrinsically through his internal Chi meridians. Those unseen conduits of the very essence of being; the Chi, the life force.
Master Leo Yim, much younger than most opponents expected now sat on a wooden bench and watched the muscular fighter struggle against the paralysis.
“Good, good,” purred Leo Yim. They all fell for it. The poisoned hand was the greatest and most subtle of all the skills of the vagabond. And people like the boorish Chuck Palmer walked right into it and didn’t even know. Two taps, one on the chest, one low on the spine. The effect was catastrophic.
Palmer opened his mouth to call for help, but instead of words, he coughed up half a pint of dark and putrid bile.
Master Yim counted silently, “One…”
Palmer’s hands locked into approximations of claws as the next stage of the death smite took effect. His eyes bulged and protruded as if forced outward from the recess of his skull; then exploded in one dreadful moment as the deadly energy collected in his cerebral cortex. His internal organs liquefied; his eyes no more than crimson stains dribbling down his chest, yet Palmer was still alive.
Master Yim counted off another digit, “Two...”
In a final effect, the entirety of Palmer’s ribcage splintered in on itself like a bear trap from hell sending countless shards of razor sharp bone through his lungs. Famed torturers such as Torquemada or the Marquis de Sade could never have envisaged the physical and mental agony endured by Palmer in his last moments. But Master Yim of the Vagabonds could. For countless hundreds of years the fore runners of the better known Ninja clans had perfected death in a myriad of ways. Chuck Palmer, martial arts champion and showman just received his. He dropped to the floor, a sack of dead flesh and ruined organs.
“And three…” smiled Master Leo Yim. He went back to the old man and his jigsaw depicting the Eifel Tower at night. He liked jigsaws…and spending time with his housekeeper…and killing troublesome Westerners.

BIO:
Jim Hilton is a writer of dark fiction, crime, horror and thrillers. At present he his working on his first novel. To see more of Jim's short fiction visit his website at http://www.jimhilton.co.uk/
Posted by Author at 16:29