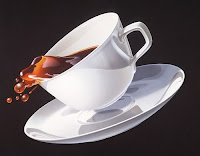 Coffee is best when it's as 'noir' as possible, and with...
Cream, Two Sugars
I found them both in the far corner of a Dunkin Donuts shop. Monte, the aging Irish guy with sandy mused hair, wrinkled facial features around heavy, cloudy eyes. Both hands showed a slight bend from arthritis with long, bony fingers tipped with nicotine stained nails. He wore an aged, wrinkled, and threadbare tan trench coat over a gray sweatshirt, with dark rayon slacks and ankle high, laced shoes.
I grinned studying the other guy called Aldo. Heavyset wasn’t the word, obese was kind. He had heavy jowls with small, beady eyes that moved under bushy brows like a lizard scanning for insects. His face was basketball size, distorted by its girth with a small pouty mouth lined with puffy, almost black lips. Large cheeks and small nose, broken several times, completed Aldo’s face under a head of black hair.
Aldo wore - I assumed what fit him comfortably - a leisure suit, faded dark with a stained white stripe up the side of the legs and matching stripe on the arms. The shirt zipper was open to mid-chest showing a thick gold chain draped from around a tree trunk sized neck. When seated, rolls of flesh from Aldo’s belly reached past his crotch, to his knees forcing him to sit alongside the table because he couldn’t fit under.
Both of them whispered keeping their words from nearby ears, an impossibility in a small coffee shop. They each had a cup of coffee. Two Blueberry muffins waited in front of Aldo who busily nibbled a coffee roll watching Monte. I sat against the far wall, at my own table, a late edition opened before me with a cup of Java in one hand, and listened.
“You know what Benny’s gonna do when he finds out it was us what put the heat on him?” Monte said swiping the air.
“Fuck are ya doing?” Aldo asked, holding the last of the coffee roll halfway to his mouth.
“Fucking fly,” he said now with both hands actively swatting the air around the table, “…use to be a time when I could catch those lil’ fucks; open my hand and there they’d be, squished… can’t even see ‘em now…”
“’Cause ya’re an old fucking Mick, not a young Leprechaun,” Aldo said while chewing.
Monte stopped. “And look at ya’ Christ have mercy on us, ya’ used to be an Italian stallion, you’ve become the Seven Hills of Roma, ya’ fat fuck…”
Aldo sipped some coffee, then dabbed his puffy lips with a napkin, “But I’m still a Stallion…”
Monte leaned in, “Ya pay for it, not the same when the Stallion was a wee Colt…”
“Ah, who gives a fuck,” Aldo snorted preparing one of the muffins for consumption. His beady eyes were wider, focused and poised, like a King Cobra ready to strike its next rat. “I eat too much and you suck, ain’t why we’re here so get on with business.”
“What happened? That’s our bizz-ness,” Monte said sarcastically. “We fuck’d up, fucking missed… how that happen?”
“Dunno…” Aldo said swallowing, “I emptied my piece at him, you did too…”
“We suck, we’re to fucking old for this shit that’s the problem,” Monte said rubbing his eyes with both hands.
“For once I agree with ya,” Aldo said, then took a long gulp of coffee.
“Benny’s just a lucky bastard, guess that’s why he’s a boss,” Monte stated tapping his coffee cup.
“We’re past our prime, Irish… way past… think we should retire; go down the Keys for awhile, maybe fo’eva…” Aldo said removing the paper wrapping around the last muffin.
The fly returned; buzzed Monte’s face then made a getaway. He watched it dart away to another table, a perfect diversion to scan the shop for anything and everything. Know your surroundings
Three kids worked behind the counter busily preparing concoctions for drive thru and a woman patiently waiting for her order at the register, and me…
Monte quickly looked at me then back to the counter, the woman waiting, and then me again. This time I felt his gaze stay, studying…
“Fuck…” he whispered. I made no indication I heard.
“Oomph…,” Aldo grunted through a mouth stuffed with Blueberry muffin.
“That guy,” Monte hushed, I could almost feel him nodding toward me, “Isn’t he one of Benny’s?”
I heard Aldo’s chair scrape across the tiled floor as he turned his weight to see. I took out a pen and pretended to be interested in the crossword.
“Naw,” Aldo said, “he’s just reading the paper…”
“I swear he’s one of Benny’s boys… we better scram…” Monte said anxiously watching me. Aldo tried to wash the remaining muffin down with the last of his coffee.
“Jesus, let me fucking finish here,” he complained.
The woman waiting at the counter turned, removing an automatic with a silencer from her handbag, firing with precision and speed. Two low thuds sounded like muffled finger snaps. Monte fell sideways against the wall. Aldo’s head rocked like it was on a spring then stopped. His little eyes glared at the ceiling.
The stunned employees stood quietly behind the counter, eyes wide, mouths open, afraid to move. Casually, without concern, the woman replaced the gun into her handbag and picked up her order.
“Cream, two sugars?” she asked.
The startled kid only nodded yes.
“Good…” she said handing him a ten spot, “keep the change.”
***
“Keep the change? Is that all she said?” the detective asked.
I nodded, “Yeah, then she strolled out the door.”
“And no one saw which way she went or how?” he said.
“Couldn’t help ya,” I said, “it was over before I knew it happened.”
The detective looked over at Monte and Aldo, both with a dark hole in the forehead, “Good shot, whoever she was…”
Course she is, I thought with a grin, I taught her well.