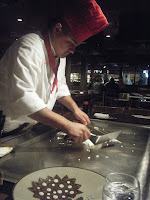 TKnC welcomes Alan to the fold...

Anthony, or Tone to his Sarf London friends was having a mare of a day.

Three years at catering college, with aspirations of being the next celebrity chef on the block, had led to a lengthy spell on the rock n roll.

Tone quickly learnt that the credit crunch was a ready made excuse for the recession hit catering trade.

Eventually he rocked up at a sandwich bar in a concrete and glass shopping complex, complete with annoying Musac.

Days were spent preparing toasted paninis for benefit-claiming mothers and their screaming offspring. Endless mugs of frothy coffee were brewed for coffin dodgers, who were keeping out of the cold and eking out their old age pension.

Despite the frustration and boredom Tone wanted to make an honest living. Villainy ran through his family and he knew that it simmered inside him. As if a dormant rage, bubbled below the surface, waiting to boil and erupt.

Frank-O, the owner, was all Brylcreem, fake smiles and pseudo Italian chat with the punters but with the hired help it was very different. He was a bully, with a short fuse that ignited a filthy mouth.

Tone had been working the early shift and it was now past six in the evening. The afternoon shift had failed to show again and he was running late for a date with the lovely but demanding Tanya.

Frank-O’s fuse started to fizz when Tone announced he was offski. His face went as sour as full fat milk on the turn.

“I pay you wages and you leave when I fucking say,” shouted Frank-O into Tone's face, covering him with spittle and halitosis. He hawked phlegm and spat, “You one lazy ungrateful pig - get toasting!”

Tone swung a ferocious boot to Frank-O’s crotch. Frank-O groaned and turned several shades of red. He collapsed to the tiled floor where he curled up whimpering and holding his rapidly swelling testicles.

Tone calmly pocketed several bundles of notes from the cash till while the customers and the rest of his minimum wage colleagues watched in stunned silence.

Tone was unaware of the meaning of the insult but had a sneaky suspicion that it was far from complimentary. Grabbing a hold of Frank-O’s collar he dragged him towards the panini toaster.

BIO: Alan Griffiths is a rookie writer, from London, England. He has a keen interest in reading and writing Crime Fiction, particularly Noir and Pulp. His short fiction can been found on A Twist of Noir, Pulp Pusher, Powder Burn Flash and Six Sentences.
Posted by Author at 14:25