PIE IN THE SKY by Vallon Jackson 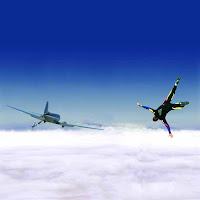 This is the latest in the PIE series following the feckless Wile E. Coyote antics of our nameless narrator and his quest to end the days of his philandering nemesis, Robert the Red...
(To read previous episodes, put PIE in the search blog bar above)

Pie in the sky

I wish that Robert had just kept things to himself, but he’s always the braggart and couldn’t help sharing the sordid details about his latest conquest.

I just happened to know that Miriam was married, happily or otherwise, to a guy at my squash club called Jim Bunk, and I happened to like Jim.

I thought about tipping Jim about his wife’s illicit rendezvous with Robert, but in the end I let it go. Robert’s dalliances had already made a killer out of one man and I didn’t want to send poor Jim down the same dark path that I’d trodden these past few months.

When I discovered that my red-headed work mate had been dipping my wife behind my back, I’d made it my mission to send the bastard screaming into his deserved place in hell. It was just a pity that I was pretty useless when it came to murder; that or way too good for my own good. My tally up until now?
My wife. check.
A train load of commuters. Check.
A hairdresser and her lunchtime appointment. Check.
The master of ceremonies at a corporate gig. Check.

It took me that long to realise that I was just being too grandiose for my own good. I had to keep things simple. My next attempt on Robert the Red was while we were out on a team building exercise. Split from the rest of our workmates, high on a cliff-side, I’d seen my opportunity. A quick shove and that would have been that. Robert would have been even redder than usual.
The problem was that my inherent bad luck had kicked in, I’d stepped on a slimy stone and it was me who went over the cliff-side. Only Robert’s quick thinking had saved me. He grabbed my ankle and held me dangling there over the chasm while I almost wet my pants. Blissfully unaware of how I’d ended in that precarious position he reeled me back to safety.

Against my better judgement – and eating humble pie - I felt I owed the prick my life. And by that very virtue, I now owed him his.

Except when he came into the office telling me all about his night on a pool table with Miriam Bunk, well, my old hatred returned ten-fold. It was all I could do not to attack him there and then, but I didn’t think that the staple-gun I was holding would be enough to finish him with; the cheap bit of office tat had a habit of sticking after every third click.

Robert had noticed my red face, but he’d misread it.

You think I did a bad thing? He asked.

I nodded. She’s a married woman, Robert, I said.

Yeah, but by all accounts, the only thing Jim Bunk serves up these days is a half-arsed volley at the squash club. I was doing both of them a favour. I keep telling you, he’d said, you have to dip your fingers in as many pies as you can, to stop them growing stale.

Was that why my wife had turned to Robert? Wasn’t I showing her the attention she needed? Maybe that was because I was working so hard to keep her in the nice things that she needed. Exactly how Jim did for his ungrateful wife.

I walked away from Robert before he could read the murder that had returned to my eyes.
I didn’t sleep that night. Or the next.
I was too busy plotting.

Next day, at the office, I announced my idea for a charity event. Knowing that Robert would leap at the chance to impress the ladies with his idea of derring-do, he signed up immediately to take part in the parachute jump.

For my idea to work, I needed to up the numbers, and I sent round a memo to drum up as much interest as possible. We ended up with twenty people in total, plus a couple others who unfortunately missed the deadline.

That meant two planes, because to keep any suspicion falling on me, we had to go up separately.
Of course, there’s always a buddy system in operation and I paired up with Robert, checking his harness and chute was properly secure.

I was on the first plane. Robert waved me off and up we went, ten of us in the back of a plane.
I was papping in my jumpsuit, but I had to go through with the jump. How couldn’t I do it when it was all my idea? I did notice that mine wasn’t the only white face among the first group, or of those left on the ground that would follow us up. The only ones looking brave were those who’d been late in answering my memo and didn’t get a chance to take part. Even my friend Jim had turned out to wave us off.

Coming down was joyful, and I almost forgot what was about to happen.

But then I saw the second plane take off and soar into the milky blue sky and a grim smile pasted itself across my face.

I alighted at the designated landing zone, then with my nine elated work-mates and the others who’d come to support us, we all stood around watching as a string of black dots were flicked out of the bowels of the second plane. We were all oohing and aahing, as you do. Watching as the black dots blossomed chutes and began the slow drift to earth.

Then the murmurs began, then a swell of panic as everyone became aware that one of the black dots was having trouble, its chute tangled in a funnel of cloth that did nothing to slow its hurtling decent. I hid my smile behind my hand, as I rolled my eyes in feigned horror with the rest of them.

The black dot grew limbs, and they were flailing wildly at the air as if trying to grab at the fabric of heaven.

It plummeted like a rock and hit the ground a hundred yards out. I swear I heard the crunch of bones all the way across the airfield.

People screamed and began running towards the puff of dust that marked Robert the Red’s less than salubrious downfall. I didn’t know why they were hurrying, because there would be nothing anyone could do for him. But I was in more of a hurry to get there and I overtook the lot of them. I pulled out my penknife and started cutting away at the cloth and lines that shrouded the steaming mess beneath (in truth covering up the fact that I’d already snicked through a couple of the guide-wires while doing the final check of his chute) as though I was trying to offer emergency help.

People finally arrived around me, and I felt hands tugging me away from the splattered wreck of humanity. It’s no good, someone cried, he’s dead.

Robert, oh my God, Robert, I moaned to add some validity to my fake grief.

Then, at my shoulder, my nemesis said; Jesus, I’m glad I pulled out at the last minute, otherwise that might have been me.

I turned around and squinted up at Robert.

How? I asked him.

Well, after we spoke about it, I felt a little bad about doing Jim Bunk’s missus. I knew it was his lifelong ambition to go sky-diving, so I let him take my place. I feel sorry for the poor bastard, but I’m glad that I found another pie to dabble today.

He nodded over at the jump instructor’s girlfriend who appeared at the door of the office looking flushed and a little rumpled.

BIO:
Vallon Jackson is the pseudonym of a published thriller author who likes to have a little fun with his imagination when he isn't writing his latest book.
Posted by Author at 17:00