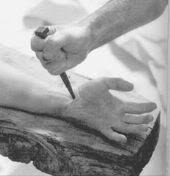 Despite the pain I’m in it’s strange, but I can feel the cold. Like when you sweat and feel that coolness on your skin as it evaporates.

There are so many puncture wounds and rips in my flesh that at times I can’t really tell exactly where the pain is coming from.

My muscles ache. I want to lie down and rest but they won’t let me. Just when I think they’ve finished they start all over again. But I know this is just the beginning.

What a difference a week makes. A few days ago I was in a very different place. Not geographically. In fact, I was just a few hundred yards from this building. But it was a world away from the present reality.

That was when people wanted to be with me. I had some very good friends, but this – this has driven most of them away. The fear of this happening to them has made them run.

It’s dark. There are still a few hours to go before daylight. More time to rip more flesh.

It could have been so different. But this is all part of the plan. I can’t change it. I can't back out now. I don’t want to, even with all this pain and terror. It is…..necessary.

It’s tempting knowing that I could clap my hands and have done with it. If it was just me, perhaps I would. But it isn’t just me. And so much depends on carrying this through, right to the bitter end.

I can hear them coming. What’s already gone is nothing to what’s coming up, I know that. But I have to look beyond it.

The pain will pass.

They only see the here and now. But I know the bigger picture. They think this will finish it. How wrong can they be.

Sue Harding works in a library in Warks. Having spent years 'shelving' books, she's starting to 'write' them instead! Sue blogs here:
http://irefusetogoquietly.blogspot.com/
Posted by Author at 16:45