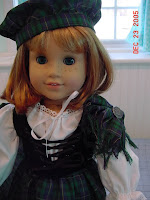 TKnC welcomes new-comer Paul with this weird and creepy tale...

When I saw the doll in the tartan outfit, my first thought was; I’ve got to have it. At the time, it never crossed my mind that I would actually steal it.

I’d noticed it in the section of the toy store where they display all the ‘New Arrivals’. I overheard the storeowner tell a customer, “Oh yes, she’s Scottish alright, I imported her directly. Pretty in all that tartan, don’t you think? I’m sure she’ll sell quite quickly.” She was pretty as far as dolls go. Most have what I’d call ‘dead-eyes’, blank and dull. The Scottish doll had bright eyes; wide-open, projecting a dreamy gaze as if she were remembering some far away place. “Scotland” the storeowner had said.

It was not her face that first caught my eye. It was the way she was dressed.

A snow-white hat and boots offset the regal reds and deep forest greens of her cross-striped dress. A woven cloth draped down from her shoulder and from her waist hung a small white purse. Around her neck were four black pipes of what I assumed was a form of musical instrument.

The doll spoke to me.

I could hear her whispering softly. I don’t believe anyone else in the store heard her. Her words were what I longed to hear, words of beauty… of adventure… of belonging, things that I would never have and places I would never see. Maybe that’s why I stole it.

There was a shelf for exotic dolls just above the New Arrivals table. They’re the dolls from Asia, Africa, Latin America, the Mediterranean and the like. Their lively colored costumes and mysterious origins were fascinating. I loved the doll from Spain, Adoracion. That was her name. She wore a dress of bright red flame broached in black lace. Her hair was jet black, pulled back in a tight bun. She was a dancer. She was the most beautiful doll I had ever seen.

There was nothing beautiful about my doll collection. They were what you might call ‘modern drab’, a mix of cheap plastic figures, plainly dressed and uninspired, nothing special really. Some had floppy hats and wide bows. Some carried cheap plastic purses. One or two had coiling, curly hair. They suited me I suppose. To tell the truth, people have described me as somewhat plain. I can admit that now. My world was pretty small. I’d never been anywhere. I longed to travel, to see exotic places, this Scotland maybe.

It is on a Friday night that I steal the Scottish doll’s dress. After the store closes and the owner is gone, I drop down from my crowded shelf and make my way to the New Arrival’s table. Her eyes are open. I know she is asleep. I carefully remove her white hat and the black musical pipes from around her neck. (I pull the burlap sack-dress over my head) I remove her woven tartan and work it over my bulky body (my red spaghetti hair of yarn catches in the straps. The dots for my eyes and the line for my mouth register no expression on my face) I put on her white hat and boots (they barely cover my ragged hair and stumped feet) I slip the musical pipes around my bloated neck. The look is complete. Perhaps now someone will purchase me.

I didn’t expect the fire. It broke out early Saturday morning and burned most of the storefront. I suffered only minor smoke and water damage and my hair was singed on the ends a bit. But the storeowner saw fit to get rid of me anyway. As he pulled me from the New Arrival’s table, he said, ”She’s not the same. There’s something about her.”

Next to me in a box is Adoracion, her flame red dress and hair now gone. As we are carried out to the alley, I whisper to her, “We will never see Scotland.”
BIO:
dedenuspaul@aol.com
http://metheothertwin.blogspot.com/
"Writing makes me nauseous. I usually vomit up a bunch of words and hope to clean them up later."
I have been published at Six Sentences (their Love Book and an upcoming one), have works at Smith Magazine, my own blogspot with writings (see above) and this piece in an edited form also appears at Fictionaut though nobody there has responded much to it- check it out- I’d appreciate it. Thanks.
Posted by Author at 11:45