THE GOLDEN SUITCASE By Matthew McBride 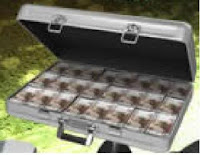 
Bishop knew with unwavering certainty that Paulie would take the money. That's what guys like him did. They took the money. Regardless of the outcome, regardless of who got hurt, and if he took the money in the suitcase, someone else would get hurt. Guaranteed.

His name was Paul Sanders and he was just a regular junkie. The kind of junkie that's behind on his rent and always bouncing between jobs. The kind of guy who could never stop scratching his sack. Even in public.

“Can you do this for me, Paulie?” The voice was asking from across the room. As Paul was gradually pulled back to reality he squinted hard in his friends direction, until he, the friend, finally came into focus. “Can you do it for me Paulie,” he was asking. Paul shrugged, maybe it was a nod.

Paulie wasn't sure about anything. He wasn't even sure what day it was.

“Christ Paulie, it's Thursday...where the hell you at?”

Paulie wiped away the sleep, hacked up a mouthful of something thick, scratched his balls, and asked his friend for a light. “Geez, I ain't got time for this bullshit Paulie, wake the fuck up!”

Paulie was awake, almost, and Bishop was stuffing piles of money into the suitcase. In the brilliant afternoon light it had a golden tint. Bishop was counting out loud but he stopped when he got to sixty-two thousand. ''This is alotta dough Paulie,” he was saying. Paulie got up off the couch and farted.

“Can I trust you with this, Paulie? This is some important shit. You fuck this up and I'm a dead man.”

Paulie said they were practically family. Course he could trust him.

“We're practically family, course you can trust me.” Bishop just shook his head and wondered if Paulie would fuck him.

Paulie was finally awake and he was smoking a roach from the ashtray. He coughed several times then offered a hit to his friend, who declined.

“I need you strait for this Paulie, got it?” Paulie pulled in a deep hit and held it as he nodded. He understood. “No problem,” he said, as he exhaled a pretty good size cloud of pot smoke. “Strait.”

His friend was a guy named Mike Bishop, and they had, at one time, been cousins by marriage. That's how he knew he could trust him. They had once been cousins.

Bishop worked for a man named Clarence Hardy, and Clarence Hardy was a man not to be fucked with. Everybody knew this, even Paulie, a guy who didn't know anything.

“Paulie, this money belongs to Clarence, and Clarence trusts me, and I trust you, so just don't fuck this up.” Paulie smoked the roach down to nothing and he reassured his former cousin by marriage that he wouldn't fuck anything up. “There's alotta money in here.” Bishop said, drumming his fingers on the suitcase.

“Easy Paulie, just drop it off at the address on this card. It's a church.” and he dropped a card onto the suitcase.

Mike Bishop explained that he had this court date, and his lawyer told him he'd better be there. So Bishop told Clarence that his cousin, Paulie, would make the drop. “You come through and maybe I can get Clarence to hire you on,” Mike said. Paul smiled for the first time through a grill of dirty yellow teeth. “Yeah, we could work together Paulie.” Paulie liked the sound of that.

After another round of questions about the delivery, and a few more reassurances that Paulie could be trusted, Mike Bishop finally left his cousins shitty apartment and walked down a long narrow flight of stairs into the harsh bright light of a Thursday afternoon. He also walked right into the barrel of a Remington 12 gauge that took his face off, and blew the back of his head all over the entrance to the narrow staircase. His headless torso hit the ground and fell to its side and blood poured out of the neck hole.

Upstairs, Paulie heard the shot gun blast and ran through the door, into the hall, and down that long narrow flight of stairs. He heard burning rubber as a car sped away, and he was clearly running on adrenaline. He was taking steps two at a time and he hit the last step with perfect rhythm and slid across the threshold in his cousins blood, in his underwear, doing a poor mans Tom Cruise into the sunlight.

He caught his balance as he came to the sidewalk where he found Mike Bishop, or what was left of him. His body was pumping copious amounts of blood from the neck wound and the white bone of his spinal cord was sticking out of the suite jacket. Paulie got sick. The puke raced up his esophagus in an instant and exploded through his tightly clenched teeth and there was no way to choke it back down.

He took a few steps backward toward the doorway when he saw one of Bishops feet twitching. Paulie's world was quickly spinning out of control, as he stood there in his underwear, with old skid marks across the back, and his socks were covered in vomit. Everywhere he looked he saw blood, and brains, and head. He stood there is a daze until he heard the noon church bells ring from across the tracks and it hit him in the chest like a thousand pound hammer. Cousin Mike was dead.

Then he thought about what was waiting for him upstairs in his piece of shit apartment. Another chance. A new life. He thought about the sixty-two thousand dollars that was now his. Fuck Clarence Hardy he told himself, as he made his way up to the golden suitcase.

Bio:
Matthew McBride lives outside of the beautiful wine country of Hermann, Mo on a heavily guarded compound along the river. He loves motorcycles, machinge guns, and Crown Royal. He's been published at A Twist Of Noir, Flash Fiction Offensive, & Powder Burn Flash. He currently has a novel under review at DHS Literary Agency.