SIDE ORDERS by Nick Quantrill 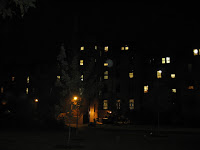 Side Orders – A Joe Geraghty story.

‘Ahmet’s paranoid, man.’
I turned to Darren and shrugged. Ignoring him, I continued looking out of the car window and into the Hull night, the city flashing by. ‘You’ve been robbed twice this week’ I said. It had just turned midnight. People were staggering home, the streets slowly emptying, but plenty of drunks still wanted their fix of fast food.
‘Bad luck, Joe. That’s all. It happens.’ Darren laughed. ‘It’s cool to have a bodyguard, though.’
‘I guess so.’ It’d make a good story down the pub, if nothing else.
‘People will you rob you of anything, even ten quid’ he said. ‘It’s not that unusual.’
‘How does it work?’
‘What do you mean?’
‘The robberies.’
‘You’ve got to report back to Ahmet, right?’
I nodded and then yawned. ‘Later tonight.’
‘Anything to make a living?’
‘It’s not all glamour’ I said. The car stank of garlic bread and kebabs. It was enough to turn your stomach. It was my turn to laugh. ‘In fact, there’s no glamour at all.’
‘I could fancy being a PI’ Darren said.
We were driving around Hull in a modified yellow Fiat Punto, dance music hammering out. Discretion was likely to be a problem for Darren.
‘It’s not all it’s cracked up to be’ I said.
‘It’d be great, man. We could even work together, once I’ve got my shit together. I’m not going to be delivering pizza forever.’
‘Good for you.’ I asked him again. ‘How does it work?’
‘Just bad luck, man. I’ve been jumped twice, some bloke with a knife. It happens. I just give him the money.’ He shrugged. ‘It’s the best thing to do, isn’t it? If you don’t cause them any trouble, they’ll leave you alone.’
We pulled up outside the delivery address. Darren switched the music off and lent into the back of the car to pick out the boxes he needed. ‘Here we go, then’ he said.
I closed the passenger door and stood at the top of the pathway. I watched Darren knock on the door and hand the food over. I was on my guard, looking around, but there was nobody about, nobody lurking in the shadows. I looked across to Darren, who was counting out the customer’s change, sharing a joke with the man. I watched him unsuccessfully try to angle his body away from me. My heart sank as I watched him take a small plastic bag from his pocket and hand it over with the pizza.

‘Joe, my friend.’ Ahmet beamed at me and moved forwards, covering me in a bear hug. He was massive; twenty stone at least and his terrible skin bore testament to working long hours in a kitchen. ‘How is my friend, Don?’
‘Don’s good’ I said. Don, my partner, would be tucked up in bed, I thought. Not that I begrudged him that. He didn’t need the hassle at his age. It was horses for courses. Don had the contacts to bring work into the agency. I had the energy and stomach for the work.
‘I appreciate what you are doing for me. You and Don are true friends to me.’
‘Not a problem, Ahmet.’ I knew when Don told me about the job it was going to be long hours and potentially dangerous. It was more a personal favour. Don and Ahmet went back years.
I watched Darren walk over to the woman stood next to the till.
‘His sister’ Ahmet explained.
I nodded and looked around. The takeaway was still busy. A handful of small groups sat waiting for their food, shouting and laughing about the night’s escapades. At least some people had enjoyed their night. Behind the counter, Ahmet had two members of staff preparing the food. One was stood quietly at the kebab skewer, shaving thin strips of meat into a large vat. Ahmet took me through to the back of the shop. Closing the door to his office behind us, he sat down behind his desk, the noise and heat disappearing instantly.
‘Did you have any trouble tonight, Joe?’
‘Not as such.’
‘No one attempted to steal from Darren?’
‘No.’
‘Then that is good.’ He looked relieved. ‘I would still like you to continue for a while longer, if you are able to.’
I moved a pile of invoices off a chair and sat down. ‘There might be a problem with Darren, though.’
Ahmet shook his head. ‘Darren is such a good worker. He worked for my brother for a long time. Gus was always telling me Darren was such a hard worker. An honest man. I am very lucky that I could persuade him and his sister to work for me instead.’
So much for Darren’s bigger ambitions, I thought. I told him what I’d seen earlier that night.
Ahmet looked worried. He must have known how much trouble this could bring him. ‘We must sort this tonight, Joe’ he said to me.

‘I still cannot believe this, Joe’ Ahmet said to me. ‘It’s not the Darren I know. I have never had such trouble in all the twenty years I have been in this business.’
I turned the heater up in the car and continued to watch. Following Darren was easy. His car stood out, even in the dark. It helped that Ahmet was in touch with the shop, so we knew exactly where the deliveries were heading to. The first two drop offs went as normal and from the car it was impossible to see whether Darren added any side orders to the deliveries. We watched him get back in his car and set off towards the next address. I listened as Ahmet called the shop to check in. Knowing the address, I eased off and headed there using a different route.
Ten minutes later I was pointing at Darren. ‘There he is’ I said, switching the engine off. We parked a couple of cars behind Darren’s Punto and looked up at the tower-block. A handful of lights were still on, but the area was quiet; the kind of place which invited fear. The kind of place where anyone could ring and order food, give a random address and intercept you on the stairs.
‘I still cannot believe Darren is doing what you say’ Ahmet said to me.
I said nothing. Takeaway delivery was the perfect cover for selling drugs, whether Ahmet wanted to face up to it or not. We watched Darren press the buzzer on the communal door. He stood back until he got a response. Speaking into the intercom, he shook his head and started to walk away, the pizzas still in his hand.
‘What is that?’ Ahmet asked.
I leaned forward. A figure had emerged from the shadows. We weren’t far away and could see the knife. I was straight out of the car, running towards them. If I’d thought about what I was doing, I would have stayed in the car.
‘Alright, Darren?’ I asked, standing between them.
The guy holding the knife turned to me. ‘I suggest you fuck off, mate.’
‘Can’t do that’ I said, hoping I sounded more confident than I felt. He was a teenager, not much than a kid. He was scared but he didn’t want me to see the fear I knew he was feeling.
‘The police are coming’ said Ahmet, eventually catching up. His breathing was heavy and laboured. He wasn’t in shape for running. ‘I have called them.’
‘Put the knife down’ I said to the teenager. I made sure there was plenty of distance between us. ‘Just calm down.’
‘Fuck’s sake.’ The kid’s hand was unsteady, the situation spiralling out of his control. ‘This was supposed to be easy.’
‘It still can be’ I said. ‘Just walk away.’
‘Can’t.’
‘Course you can. The police aren’t going to be here for a while yet.’
‘No.’
‘Be on your way, son.’ We all turned towards the newcomer to the scene. The man was even bigger than Ahmet, but definitely family.
Ahmet shook his head. ‘Gus?’
‘Good evening, gents.’
I turned to Ahmet, looking for an explanation.
‘This is my brother’ he said, looking away from me.
I didn’t like what I was hearing.
‘Ahmet is my brother’ Gus said, holding his hand out to me, ‘and my business rival.’ ‘I swear to you, Joe, I didn’t know about this’ Ahmet said to me. ‘I wouldn’t have asked Don to send you if I had known the truth.’
I turned to Gus. ‘The robberies were your idea?’
‘I’m not proud of it’ he said ‘but yes, I had to send Ahmet a message. I cannot tolerate his behaviour in stealing my staff.’
I shook my head and turned to Darren, understanding the set-up. ‘You were in on it, weren’t you?’
Darren put the pizzas down. ‘I needed the money, man.’
‘For your bigger plans?’
He said nothing.
‘It’s not Darren’s fault’ said Gus. He turned to his brother and pointed. ‘If he could have just left my staff alone, none of this would have needed to happen.’
It started to make sense. ‘Darren’s sister would ring you, wouldn’t she’ I said ‘tell you where to send your man with the knife? Make it look like a robbery?’
Gus nodded. ‘Yes. She is loyal to me. She only left because Darren had his head turned by my brother. She wishes to return to my employment. As does Darren, really.’
Easy pickings, I thought. No wonder Darren was so relaxed about the situation. He was never in any danger. I wondered how many times he thought he’d be able to turn the trick before calling it a day. He probably thought he was bullet proof but your luck has to turn eventually. I heard police sirens in the distance. Turning to Ahmet, I told him there was no need for me to be here. He could sort out Darren’s side orders business if he wanted to. I wasn’t interested. The night was cold and I was tired. I’d tell Don to raise an invoice tomorrow. I put my hands in my pockets and headed back to the car.
BIO:
Nick Quantrill's novel, 'Broken Dreams,' featuring Private Investigator, Joe Geraghty, will be published by Caffeine Nights, late 2009. For more info, take a look here:
www.myspace.com/hullcrimefiction
Posted by Author at 15:44