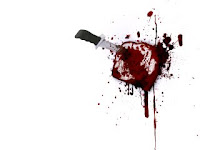 A single drop of blood fell from the tip of the knife and onto the pub floor. It’s amazing that in the movies there is blood all over the knife, but in reality there is very little. It’s almost as if the blade gets wiped clean as it’s pulled out. Granted, I mean if you stab a person multiple times then it’s going to be a bloodbath, it will be all over the blade, the floor and probably the walls, but one fatal stab usually leaves your knife quite clean.

Anyway, back to what I have to tell you. There was silence as the victim stared into my eyes, realising what had just happened. The blade had entered his body just below the breast bone in an upward thrust, piercing his heart. It’s funny that as his heart rate went from maybe 80 to zero, mine went from 60 to 120 in just a few seconds. You wouldn’t believe it but killing somebody can actually have a positive affect on your health as, as your adrenaline flows through your body, your heart rate races thus burning calories. I’m not too sure what amount of calories you burn in the few minutes that it takes you to carry out the act and come to terms with what you have just done, but I think it has got to be a fair few.

All of a sudden there was an ear splitting scream that came from my left. My victim must have just still been able to register this, as his eyes went from my face to his right. His head didn’t move and his mouth stayed open in a silent wail. I turned my head and saw the woman he had been standing with staring at us in total disbelief.

“Gordon! Nooooooo! Pleeease God no, not my Gordon.” She wailed. She wasn’t a very attractive woman and maybe in her late twenties but looked older. She was certainly younger than the dying man slowly loosing his grip on my shoulders.

“You bastard!” the woman shrieked as her ‘Gordon’ fell to the floor in a heap. She fell to her knees, rolled him over and cradled his head. His lifeless eyes staring past her and up at the ceiling. If his spirit was waiting for the light to the special place, it was going to be waiting a long time. There was only one place that Ralph Perkins was going and the flames would be licking round his soul soon enough.

“Why? You fucking bastard, why? She cried rocking back and forth. “He’s never done anything to you. We don’t even know you, you murdering bastard!”

I stood looking down on them, motionless and then my eyes scanned around the room of the pub. It was the first time I had even noticed the people in there. On a quick count there were five men and two women plus the two at my feet. Everyone was staring at me open mouthed, fear etched into their faces. A large built man was making his way from behind the bar. I realised he must have been the landlord. He held his hands up in front of him as he approached.

“Take it easy now. Let’s just take it easy. Why don’t you give me the knife and we can call the po…”

I stopped the big man before he could finish his sentence by lifting my knife hand, only to open the right hand side of my jacket. In the inside pocket I took out an envelope and offered it to him.

“You should look at this before you call the police.. It may change your mind.”

“Careful George,” one of the men by the bar said. I looked at him and still holding out the envelope assured the man that it wasn’t George who I was after. Nor was it any of the other people inside the pub.

“I came for one person and he is now lying dead at my feet. I have no other business here.” I told the people looking at me.

George took the envelope from me and stepped back. The woman was still sobbing on the floor next to the now dead Ralph Perkins. I looked down at the woman.

“How long have you known Gordon?” I asked her.

“Two…maybe three weeks.” She replied, this time looking up at me. Her mascara had run down her cheeks, her eyes were red and I couldn’t help but think that I was looking down at Alice Cooper.

“What did he make you wear?” I pushed.

“What else? What else did the sick fucker make you do?”

“Fuckin’ hell,” I sighed, “you need to get yourself sorted out. Keep up what you’re doing and you’re going to end up like Ralphy boy there,” I finished, looking down at the stiffening corpse at my feet. It was then that I noticed blood on my t-shirt between my open jacket and a small pool of it around my left foot.

“Oh….bastard!” I sighed more to myself than anything.

The woman hesitated a moment too long so I bent down and grabbed her under her left arm, lifting her to her feet.

“GO!” I snarled into her ear, “Go home and forget about what has happened here. You’ll understand soon enough. Keep an eye on the TV. You’ll thank me for saving your life. Go.” I finished, pushing her towards the pub entrance.

During this time, George the landlord had been watching the proceedings and not opened the envelope. He stepped in front of the leaving woman.

“I don’t think that is too good an idea. The police will want witnesses so I don’t think anybody should leave,” he offered, putting a hand on her shoulder.

I looked George directly in the eyes. “Open the envelope George and let the woman leave. She won’t say a thing to anybody about this. Neither will anybody else here when they know.”

George reluctantly let the woman leave and then slowly opened the envelope. His eyes darted from side to side as he read the information on the paper. His eyes welled with tears as he finished the first page and started the next. Outside blue lights flashed in the darkness of the night.

George looked up at me, a tear running down his cheek and falling from his chin. He sniffed and wiped a large hand across his face. He passed the documentation to the man who had warned him earlier and walked towards me, placing a hand on my upper arm.

“This way,” he said, ushering me towards the rear of the pub.

“That’s not the police out there. It’s a special team who will come in, move the body and clean up with no questions asked. They don’t know my identity and I don’t know theirs. It will be like nothing has ever happened” I told him as we walked down a short hallway.

“I know George. It’s not right. But it wasn’t right that my four year old boy was taken from me. That too was cold blooded, but he didn’t choose to have his life taken away. The likes of Ralph Perkins chose that for him and there’s still many, many more out there and if I can eradicate as many as is humanly possible while I can, then I can sleep at night. Ralph Perkins served two years of a five year sentence for…”

George cut me short. “I know, I read the document, but…..” he hesitated, “it won’t bring your boy back.”

“No, George, it won’t. But each one I take away from the public, because this fucking government and the do-gooders that are part of won’t, then I can save other children from the same fate as my son. I will meet my son again George, when the time is right but until that time I have to do this. Right or wrong.”

As I finished what I was saying my mobile buzzed in my jeans pocket. I fished it out and looked at the screen, reading the text message.

“Got to go George,” I said and walked out into the night, hearing the door being pulled shut behind me.

My locations are set up for me by, well; we’ll not go into that right now. I get my text message and make my way there, and I get the job done within two days. More information is then sent via text once I’m there and I suss out the place and the victim.

Ralph Perkins was my fourth. It gets easier with each one but the first was obviously that hardest thing I’ve done in my life. Only because of my son was I able to carry out the task. I cried for days on and off but then realised that I really hadn’t done anything wrong. I think maybe the tears were for my son more than anything. Maybe one day I’ll tell you about the previous three, I’m sure you’d be interested but at this moment in time I’ve got things to do. I won’t give it two days for this one. I seem to get more of a hunger for it with each one.

I’ll be in touch soon enough with my latest news and maybe fill you in on one of my previous victims, but until then take care..

Sorry, I didn’t introduce myself. My name is Vincent Mitchell, father of Ben Mitchell and ex husband of Fiona Mitchell and for advice; there are more legal ways to burn calories.

Bio:
Manchester born and bred, but now living in Crieff, Scotland with wife, Lisa, and our two daughters, Imogen & Melissa. Wrote some years ago but have recently been inspired to write again by an old and good friend (Col Bury) and the beauty that surrounds me up here. Always reading - when not entertaining my girls and working - crime and horror…and now writing.
Posted by Author at 15:17