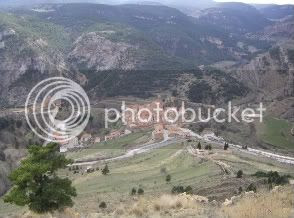 CK brings in the new year here at TKnC with this mind-stretching tale...

'Professor York?' The slim, dark-haired woman hailed the Head of Psychiatry at the entrance to his office complex. Beyond, under the ugly orange glare of the lights and behind electrified security fencing, squatted the Military Penitentiary Secure Unit.

'That's right.' The Professor was in a hurry to be out of there and into the bracing night air. He needed to breathe freely, feel the ice of the winter against his face to prove that the real world still existed. Sometimes he thought he was going mad, like so many of the prisoners in the Unit. Get a grip! He closed his eyes momentarily.

'My name is Cariolin,’ the woman said.

The Professor jolted. For God’s sake, man, get a grip! That name… It’s a coincidence…'What an unusual name - excuse me.' He tried to move around her, but the slim woman spun like a dancer and fell into step with him.

She smiled up at him for the CCTV camera’s sake, but the smile didn’t reach her eyes. 'We’ve never met, but of course you know all about me,’ she went on conversationally, taking his arm. ‘So you’ll understand when I tell you that I've just come from a village called Emoravan, in The Evrain.'

The Professor felt his skin prickle so tautly his scalp moved. He swallowed. His mouth opened. He stared down at her. 'That’s not possible!' His voice was a shocked whisper.

'Of course it is. I’m here, aren’t I? Flesh and blood. Feel.' She tucked her forearm through the crook of his elbow and squeezed. Her grip was steel. ‘I’m whole. You haven’t hurt me, yet.’

They walked out of the lobby and into the freezing December night.

'My people sent me with an ultimatum for you, Professor: change what you’ve written about us and nothing bad will happen to you. Refuse, and we’ll be forced to defend ourselves.’

'Nobody knows about Emoravan, or what I make happen there.' Professor York whispered as the woman led him to his car. 'How could anyone know? The Evrain is my invented country, a setting in my novel.'

'Which makes us real to you. And we don’t like what you’re doing to us. We want you to unwrite what you've already done.'

'You can't be real. You can't exist. Emorovan is part of my dreams, a fantasy, my escape from ...' He glanced back towards the Penitentiary.

The woman smiled and sideswiped a killer heel down the outside of the his calf. ‘Does that feel real enough, Professor?’

He cried out and bent to touch the raked leg. His fingers came away bloody. ‘You're not real!’ His teeth clenched with the pain. ‘You’re an hallucination. I've been working too hard.'

'We know about that work, too. We know what you’ve done to their minds, you and the Militia of this country,’ she all but spat at him. ‘How do you live with yourself? No wonder your wife no longer does. But you can undo the damage you’ve done The Evrainians at least. Stop writing your horrors that have become our story. We of Emorovan demand it. And edit out the parts about the burnings and the rapes and the murders. It may please you to do these things to us, but believe me, it does not please us.'

The Professor's hands were trembling so badly that although he shook himself free of her clasp, he was clumsy in opening his car door and settling behind the steering wheel...

The woman bent down at his window, that rigor of a smile still showing her beautiful even teeth. As he shovelled around with the key, eventually piercing the ignition and kicking the engine into life, she whispered through the glass. 'I mean it. Rewrite and then stop - so that I can return to the Evrain tonight, to a community that deserves better than you've given us. Or ...'

'I'm going mad. I've finally gone. Holy mother of God. You can't exist. You can't, you're part of my fantasy.'

'Thank you,' said Cariolin, wryly. 'Last chance, Professor. Do I have your promise?'
The Professor, sick, trembling, muttered, almost to himself. ‘You can do your worst. I make no deal with blackmailers in the real world and you are not reality.’

'You will be stopped. You just watch what 'your fantasy' can do to you.'

The Professor released the handbrake and stamped on the accelerator and the BMW’s spinning tyres screamed against the tarmac and rocketed him out of the complex, away from the manifestation of his madness. He was sweating, colder than he'd ever felt.
'Not real. Can't be happening, need to get home ...' His knuckles were white and he leaned forward into the traffic, cursing other drivers as he weaved through the rush hour. Cariolin… I was about to have her burned to death… I was going to finish that chapter tonight… How can she be here, at the Centre? I’m going mad…

Out on the motorway, his panic worsening, he realised that the stab to his leg could have introduced some kind of drug into his system. He could feel his grip on reality blurring and loosening. His car seemed to be full of passengers, their faces were those of the victims of his mind-bending experiments, men who were already dead. And the dead men stared at him, hating, waiting…

One laughed at him from the mirror, another cursed from the footwell, a third, obscenely, kissed his right ear and he swerved to avoid the speeding car that blared its horn at him. He overcompensated, struck into the articulation of a huge juggernaut on his left at just over a hundred miles an hour.

He died screaming as his vehicle rebounded, rolled and then exploded against a bridge pier in a vast orange fireball, its light eerily echoing and bathing the Psychiatric Secure Unit.

Cariolin was walking, unhurried, around the Penitentiary perimeter fencing, killing time while she waited for the pick up, for her journey back to where she’d come from. She stared at the complex of the Psychiatric Unit under its sinister orange lighting, impregnable behind its high-voltage fence and spiked wires. Nobody will ever know for sure who I am or where I came from. They’ll call his death a tragic accident, a waste of a brilliant mind. We can’t undo what he’s done, to any of us. But there will be no more of it. And I will not burn to death tonight, as he had planned for me…

She raised a clenched fist high in a victorious, pseudo-military salute: revenge for the prisoners tortured and murdered beyond the wire, revenge for the people of Emorovan, a small village in The Evrain...

BIO:
C K Andrew lives on Exmoor and has published many short stories in various womens' magazines.
Posted by Unknown at 19:28