BURYING THE HATCHET By J. Vandersteen 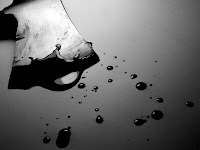 TKnC holds out the hand of greeting to Sons of Spade webmaster and the creator of Noah Milano with this story...

Phil Banks downed his second shot of Jack. He was seated at the bar of a joint near Hollywood. He was waiting for a customer. The price his customer was willing to pay for the crime scene shots in his jacket pocket would pay his rent for a month.

When he had to leave the LAPD a couple of years ago he quickly found another way to pay his bills. In fact, it was the same thing that had gotten him kicked off the force in the first place. He’d been selling murder and crime scene memorabilia to interested collectors. He got into the business when he had to pay off his gambling debts to some nasty bookies. Instead of taking money from the mob to look the other way he decided selling off some crap nobody else found any use for was a hell of a lot better than being on the take. His superiors didn’t think so however, and when they caught him selling the glove of a convicted hitman to a collector from Santa Barbara he was out of a job faster than you can say Richard Kuklinski.

A silver haired man with a crooked nose and an expensive suit entered. He was as out of place as Banks would be at a ballet recital. Banks knew this had to be his buyer.

He raised his hand at the silver haired man. “Come over here. Have a drink.”

Silverhair took the barstool next to Banks’. “Mister Banks?”

Silverhair choose a scotch and soda. Lou, the bearded and tattooed bartender set it down in front of him. Silverhair made a move to pay but Banks told him he would take care of it.

“Thank you. But can we safely do business here?” Silverhair glanced over his shoulder. Banks guessed the guy had a reason to be a bit paranoid.

“Don’t worry, mister Cray. Lou isn’t interested in our business as long as I pick up the tab.”

Banks smiled. Cray was obviously used to doing business transactions, although of course not exactly the kind he was doing here. Before setting up the meeting Banks had done a thorough background check on his customer. He wouldn’t want to get caught by an undercover cop. After all, the way he’d gotten his hands on the merchandise was not exactly legal, and he didn’t want to jeopardize or lose his source at the LAPD evidence room. Cray was the owner of a real estate company with a profit of a cool million a year. He’d been in the news just a few months ago when his house burned down. Why a rich old bastard got off on crime scene shots he had no idea, but that wasn’t what he was interested in anyway. Everybody had his vices, right?

Banks took an envelope out of his jacket pocket and handed it to Cray, who greedily accepted it. He opened the envelope and scanned the two black and white pictures that were in it. Banks knew exactly what was shown on those pictures. He had to hand it to Cray, he was one cold son of a bitch. Most people would get pretty nauseous looking at them. The pictures had been taken forty years ago, at the crime scene of the Hatchet Man’s first murder. Hatchet Man had been the nickname of a serial killer that had been prowling California for a few years before suddenly dropping from the face of the earth. He’d never been caught, but had managed to kill off six prostitutes during his activity, using, quite predictably, a hatchet. The only clue the cops had to his identity was the eyewitness report describing a young man with a crooked nose leaving the alley where one of the victims was found around the time the murder had to have taken place.

Crooked nose? Banks got a funny feeling in his stomach. That same feeling he got when he picked out the correct horse to bet on or when he was interrogating a suspect back in his days as a homicide cop and suddenly knew, just knew the man he was interrogating was the killer. He tried to shake off his thoughts, calling them too farfetched, but just couldn’t. He decided to confirm his suspicions. First, he had to close the deal, however.

“Are they what you were looking for?” Banks asked Cray.

Banks showed Cray an open palm. “Then you owe me six thousand bucks.”

“Of course,” Cray said and handed Banks a white envelope.

Banks opened it and quickly counted the cash it contained. It was all there.

“Nice doing business with you,” he said.

“Likewise,” Cray said and shook Banks’ hand. Then he left the barstool and walked out of the bar. A minute later Banks was gone as well.

Following another car without being seen isn’t quite as easy as most TV-shows make it out to be, but Banks was trying it anyway. When he was still a cop he used to work with other colleagues and cars, so the target wouldn’t notice.

He followed Cray’s Audi into the desert. He had to leave a big distance between his and Cray’s car, not much other traffic in sight. He used his binoculars, which he normally used to scope out the territory when he was meeting up with a client, to make sure he didn’t lose him. Eventually he saw Cray park his car near an old shack. He found a pair of rocks to park his own car behind, as camouflaged a car could be in the desert.

Why would a well off man like Cray own a dump like that? Banks felt compelled to take a look inside the building. He waited for two hours. After that time Cray left the shack and got in his Audi. Banks waited until he’d driven off and was far out of sight. He drove his car closer to the shack. He got out of his car and walked over to it. He had a tire iron in his right hand.

The shack was locked with an old fashioned padlock. He used the iron to pry open the door, hearing the lock pop with a satisfying crack. He entered the shack.

There was an old couch inside, a desk and a lot of file cabinets. On the wall were dozens of pictures. Banks took a closer look. He winced at what he saw, and he’d seen a lot in his career, so it took a lot to shock him. The pictures all showed half-naked women with hacked off limbs, drenched in blood. The Hatchet Man’s victims… He noticed the lack of evidence markers in the pictures. These had been taken before the forensics had arrived at the scene. He understood he’d been right. Cray wasn’t just someone interested in serial killers, but a serial killer himself.

Behind him he heard the door creak. He turned around, holding the tire iron like a weapon. Cray was standing in the door opening. In his hand he held a big hatchet.

“Did you really think I didn’t notice you following me? If I’d been that stupid, I would’ve been caught long ago,” Cray said.

Banks cursed himself. He’d been gone from the job too long, out of practice and too cocky. What the hell had he been thinking anyway? He wasn’t a cop anymore, what was he doing there in the first place?

“Nice shrine you’ve got here, Cray,” Banks said. “I know bastards like you enjoy reliving your greatest moments. Is that what you do here? Get off on your old, sick work?”

Cray lifted the hatchet. “Shut the hell up.”

“What happened? Some of your old mementoes got lost in the fire? So you needed me to get some new ones?”

Cray charged. Banks managed to block the hatchet with his tire iron. Although Cray was ten years older than Banks his mania seemed to give him great strength. He tried to push the iron out of Banks’ hands.

“Will you just fuck off,” Banks said and kicked Cray between his legs with full force. Hatchet Man went down on his knees and Banks managed to wrestle the hatchet away from him. Without thinking twice he buried it in Cray’s skull.

It took him a few minutes to catch his breath, but then Banks’ business sense set in. He started to collect the pictures that were on the wall, stuffing them in his pockets. That stuff was going to bring in a lot of money.

He walked over to his car, got a can of gasoline from it and doused the shack with its contents. He lit a match and dropped it, running off to his car.

Without looking back he left the shack to burn down, along with Hatchet Man’s dead body. He had some new merchandise to sell.

Jochem Vandersteen is the webmaster of the Sons of Spade weblog as well as the writer of the Noah Milano short stories and the novel White Knight Syndrome.


http://sonsofspade.blogspot.com/
Posted by Author at 10:40