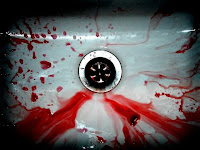 Flash fiction is always welcome, and so are new contributors. TKnC welcomes John Wiswell to the fold...

Pat shot out of his chair when Conner finally came home. The boy’s clothes were crusted in brown grime and he was breathing with heavy excitement.

“Where you been, boy? Gone for four days without a word!” Pat said, pulling him inside. Conner followed his old man’s lead to the kitchen with such a smile that Pat could barely bear it.

“Is he missing, too?” The boy sucked in air in little bursts, like reverse laughter. “I just spent days finding the devil. You’d have been so proud, Pat.”

He reversed-laughed some more and bent towards the sink. When the water ran over his hands the brown turned a little red and circled the drain. Pat’s eyes widened at the change of color.

Conner beamed at him from over his shoulder, scrubbing his hands with lava soap. “Finally cornered him at the dump. His tail stuck in an old box spring, and he’d dropped his pitchfork.”

Smoke began to rise from the sink.

Bio: John will write anything once. His blog, www.johnwiswell.blogspot.com, features monologues, vignettes, character sketches, list fiction, straight dialogue and other forms of brief prose spanning humor, Horror, History, science, Fantasy, and all corners of the absurd.
Posted by Author at 17:14