A SOILED AFTERNOON By Sandra Seamans 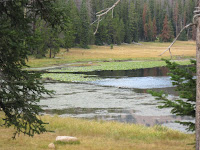 Igby Marsh scuffed his sneakers through the powdery dirt, creating clouds of dust as he walked an ever widening loop around the yard. His sister, Lisa, was napping in the shade of the big oak that leaned up against their front porch and he’d been charged with watching her. Well, wasn’t that just a boring waste of a summer afternoon?

Right this minute, he could be swinging out over the water on the rope at Morgan’s Pond with his buddies, but no, Ma needed him to keep watch of Lisa while she ran errands. He glanced at his sister. Odds were, she’d probably be asleep for another hour, plenty enough time to sneak on down through the pasture for a quick dip in the creek.

A few minutes later, Igby was squatting down behind a fall of rocks above the creek trying to get a better look at the couple paddling around in his favorite swimming hole. He had a pretty good suspicion that it might be their next door neighbor, Beau Landry.

Beau had spent many an evening on their porch bragging about the number of girls he’d sweet talked into skinny-dipping with him. After one of his visits, Igby would fall asleep dreaming of the day he’d be grown up enough to talk a girl out of her clothes. Though he wasn’t quite sure what he’d do with her once he got her naked. Still, it was nice to imagine.

Tiny shrieks of laughter and the sound of splashing pulled Igby out of his daydreams. He caught a glimpse of twisting bodies pushing and rolling through the water, almost drowning each other. Holy heck, they were wrestling. Funny, he’d never thought grownups could whoop it up like a couple of kids. Igby belly crawled further down towards the creek trying to get a better look. If Ma found out what he was doing, she’d tan his hide good, but Igby was more than willing to take the risk. After all, he was just a bit shy of twelve, practically a man. And down there in the creek was a real live woman who was most probably naked as a new born. Yep, Igby was more than ready to find out what all the fuss was about.

His breath caught in his throat when the woman stood up and waded out of the water, her red hair gleaming in the sun, water dripping down her freckled back and sliding over her rounded backside. Over the sudden thudding of his heart, he vaguely heard Beau speak her name. Igby’s eyes widened when she turned. The sound of her voice dousing his every fantasy with the force of a fire hose.

“I’ve got to get back to the house,” she said. “My husband will be expecting supper on the table when he gets home. And knowing Igby, he’s probably found all sorts of trouble to get himself into and forgotten all about watching his sister.”

Igby rubbed his fists into his eyeballs, wishing for a bar of soap to wash the image of his naked mother from his brain. Stealing another look, in the hopes that his eyes had betrayed him, he saw his father step out of the stand of pines on the other side of the creek. Daddy had a brace of rabbits slung over one shoulder and the shotgun resting on the other. He caught sight of Igby and nodded him off toward home. Igby didn’t hesitate, he tore out, his feet carrying him lickity-split back the way he’d come.

Lisa was still napping under the oak tree, her pink blankie crumpled under her freckled cheek and a pudgy thumb jammed in her mouth. Igby touched one of her red curls gently with his finger, tears tracking through the dirt on his face. He swiped at the tears with his the back of his hand, then gently shook Lisa awake.

He made her play in the corner while he set the table for supper. He poured them some milk, cut slices from the fresh loaves of bread their mother had baked that morning and slathered them butter and jam. Lisa chattered away at him while they ate, but Igby’s ears were on the listen for his father.

When the clock chimed eight, he got Lisa ready for bed, made her say her prayers, then tucked her in. And still daddy wasn’t home. Igby turned out the lights and sat in the dark, waiting.

The slap of the screen door woke him. Igby watched his father walk across to the kitchen cupboards. He pulled out a bowl and tossed the skinned rabbits in, then set it the fridge. He walked over to the sink and held his hands under the faucet scrubbing the dried blood and dirt off his hands.

Igby sat quietly while his father poured himself a glass of milk and tossed some left over venison steaks on thick slabs of bread. Over the top of his sandwich he caught sight of Igby.

“This ain’t something we’ve got to talk about, is it, boy?”

“Good, then get yourself upstairs, it’s past your bedtime.”

Bio:
Sandra is a short writer. You'll find her stories scattered about the Internet in zines like Beat to a Pulp, Spinetingler, and A Twist of Noir. She blogs about short stories and writing at http://sandraseamans.blogspot.com/
Posted by Author at 16:34