THE RECKONING By Lee Hughes 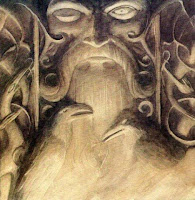 Who says we've forgotten the true meaning of Christmas?


- You wonder why I'm pissed off? What you think, I should be happy as Larry because I lost my job to a charlatan of a fumbled together religion that half-inched this and that from here and there. It was I, Odin that went about on my eight-legged horse at Yuletide, switching carrots for candy in the boots that children left out. Us old Gods are getting tired of it. I was retired from that tradition by Christianity and then re-designed by Coca-Cola to create a fat old fool that breaks into homes and leaves for the majority of the time, tat beneath trees.

- I've heard the saying that if you wish hard enough then it'll come true. So now you're here and I'm a mixture of wrath and spilled reindeer blood. Think I wanna be like this? I'm a fucking God. What am I reduced to now? A page on Wikipedia?

Father Christmas gave out a howl as Odin ordered Thor to take his hammer to his right kneecap. One hit and most of the leg was gone.

- That'd didn't sound much like a ho-ho-ho. Knee-shots hurt like a bitch, don't they. We're taking back what's ours, all of us. We're starting with you fuck-nut. Don't worry, we'll dump you beneath a tree.

"But what about the children? The good boys and girls?" Father Christmas said through tears.

- Sleipner is coming out of retirement and I'll go back to doing the job that was rightfully mine.

"Will you embrace the true essence of Christmas?"

- No, but I'll embrace the true essence of Yule.

Thor took the hammer to task again and did the other knee in.

- Too late. It's the only way. Gotta have you bashed out of existence, I'd do it myself but only Thor can lift the hammer.

Odin smiled at Sleipner as he mounted him and took to the skies. The horse's eight legs bothered thin air as it galloped.

For hours, he rode the Yule Eve skies searching for shoes or boots left outside. He encountered only one pair and found them barren of carrots for Sleipner. It wasn't going to plan. He picked up the mud-covered shoes with the studs in the soles. He shrugged and sniffed to make sure that the shoes weren't soiled with shit when the door opened.

The man hit him hard with a golf club. "What the fuck do you think you're doing sniffing my boy's footy boots, sick bastard." He hit him again.

Odin took a decent beating before managing to get back to Sleipner and escaping to the safety of the skies while the angered father looked on in disbelief.

The first thing Odin did when he got back to Asgard once he'd dabbed at his face with Savlon was to get in touch with the fertility Goddess Eostre and tell her to let the Easter Bunny go; it just wasn't worth the hassle.

Merry Yuletide, one and all!