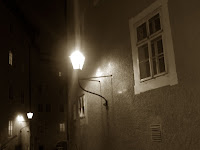 Here at TKnC we are thrilled to welcome Adrian to the ranks with...


I found him slumped in a doorway, a shapeless sack in a once-smart grey suit, silk shirt and handmade shoes. He was breathing heavily, head thrown back at an angle, as if trying to peer under the shop’s door. The air stank of urine and other stuff I didn’t want to think about.

I took out my mini-light and checked his face. It was him, all right… the man I’d come to bring in. Flushed, puffy skin, slack mouth and the beginnings of next day’s whiskers. He had the dirty impression of a shoe print on one cheek and a stray piece of Christmas tinsel stuck to his forehead.

Season’s greetings, goodwill to all men.

I patted him down and checked his pockets. No wallet, no car keys, no cash. Just a used handkerchief.

Someone laughed, a raucous cackle without humour. I looked across the street to the darkened doorway of a nightclub. The place buzzed with vibrations from the music inside, some manic Yuletide tune from the seventies. The bouncers had retreated from the cold, leaving the pavement outside to the night prowlers.

It was one of these who’d laughed.

Indistinct, their hoodies were what marked them out, pulled down to hide their faces from the street cameras. Like their four-legged counterparts, the hyenas, they were loathed and feared, preying on the vulnerable, hunting in packs. I counted five in a huddle, looking my way. They’d already been here, done what they did, probably pausing to give him the kick for good measure.

Soon, they’d get brave and come over to see what they could get, only this time from me.

I decided I’d come back to see them later, bring them my own version of Christmas cheer, see how they liked it.

For now, I ignored them and slapped the man’s face. It was a light cuff, but hard enough to get his attention. He stirred and swore, then turned away.

I swore back at him. I had to get him out of here. Apart from the danger, the smell was making me feel nauseous.

A flicker of movement in my peripheral vision. One of the prowlers had moved, slinking away down the pavement to one side. Another peeled off and went the other way. The remaining three stayed where they were, watching.

I knew the tactics. The sweepers would disappear, swallowed by the shadows. The other three would dicker for a bit, then one of them would venture out of their doorway and cross the street. He’d do it at an angle, probably stopping to light a cigarette, making sure he didn’t look directly at me.

He was the decoy, drawing all the attention.

After a bit, he’d make a sign, and the sweepers would come in at a rush. The decoy would stay where he was, watching to see if they needed help, as would his two other mates.

I reckon I had thirty seconds, maybe a minute at most, to get moving. Once I was on my feet, with the man vertical, too, I’d be all right. After that, I’d be easy meat. These particular hyenas didn’t like taking on anyone still standing; it was too messy and the camera operators could see what they were doing and call up the night squad. Anyone lying down, they could always claim they were trying to help.

I checked inside my jacket. I had an asp – a telescopic baton – tucked inside a special pocket. I wasn’t supposed to have it, but when you move in the circles I do, it pays to have an edge.

Footsteps scuffed down the street, and I looked up to see one of the sweepers crossing over to my side and angling back towards me. He looked big and handy – a rough-houser. I didn’t need to look for the other one; he’d be doing the same.

I gave the man another slap, and this time he batted a large hand in my direction and said something obscene. I ignored it, tried to pull him up. Christ, he was heavy.

He swore again, a litany of filth inspired by drink and garnered from years in trouble spots around the world. I knew his history all too well. There was a time he’d never have been caught out like this.

He turned and looked my way, eyes beginning to focus. I slapped him again.

‘Bastard!’ He coughed, then turned and spat against the shop window.

The sweepers were getting closer, and the decoy was making frantic signs, a cigarette in one hand, a lighter in the other, glinting metal. He could see what I was trying to do. Once I stood us both up, they’d lose the initiative.

Beyond them, the face of a bouncer appeared in the nightclub doorway, watching the play. He’d stay where he was unless it looked like a mugging. Even then, he might not bother.

The man sat up and tried to punch me in the head, instinct kicking in. Lucky for me, he had the coordination of limp spaghetti and missed by a mile.

‘You should do,’ I said. ‘Get up.’ I grabbed both wrists to stop him hitting me. A smack in the head still hurts, even from a wobbly drunk.

‘Yeah, I know you… I’ve slept with your mother!’ He laughed like a maniac and hawked noisily, then tried to head-butt me. ‘I’ve done your mother, you wee skanky little shite!’

The decoy had stopped, cigarette unlit. Made a hold-it signal to his mates.

I had seconds left before the sweepers got the signal to go for it. I yanked the man towards me and slid round behind him, got both hands under his armpits and hauled him to his feet. He stank of booze and fags and whatever the hell was already in the doorway when he’d landed here.

‘Done her, you hear?’ he yelled wildly.

I took out the asp, flicking it open with an audible click, just so the hyenas would get the message, then dragged him stumbling out of the doorway into the open. Inside the club, they started up with ‘Jingle Bell Rock’.

‘She’s beautiful, your mother.’ This time his voice was softer, regretful.

‘Christ, you’re an embarrassment, dad,’ I told him, and held him close. ‘Let’s get you home, shall we?’

website: www.adrianmagson.com/
'NO KISS FOR THE DEVIL' - "Magson is a gem of a writer. (He) has a unique and wonderful voice and his characters are unforgettable." CRIMESPREE MAGAZINE (US)
'NO HELP FOR THE DYING' - "Gritty and fast-paced detecting of the traditional kind, with a welcome injection of realism." Maxim Jakubowski - THE GUARDIAN
'NO TEARS FOR THE LOST' - "This intelligent crime novel... should garner the British author a larger following in the U.S. The crisp writing and fresh characters make this stand out from the mystery genre pack." PUBLISHERS WEEKLY
Posted by Author at 18:11