AT THE NORMAL CAFE - MOSQUITO By Chris Allinotte

Here we have a new series called AT THE NORMAL CAFE... 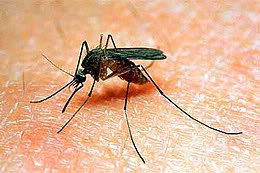 Its little wings make a tiny pinging sound as they repeatedly collide with the tumbler. I trapped the mosquito when it landed on a sticky patch on the counter, yolk from my eggs I think.

My cell phone is beside the glass, but only the glass is ringing. The case is battered from sharing a pocket with my keys. I sip my coffee, and watch the phone. It’ll vibrate when it rings. I never use the ringer. All those overly joyful beeping melodies give me a headache.

“Anything else I can get ya?”

“Bev” is hovering with her half-full pot of disgusting coffee. I get the feeling she’ll be closing this place as soon as the last of us leave, probably can’t wait for it either. I check the neon-ringed clock above the mirror – 2:30 am. With a tiny shake of my head, she’s dismissed; like she gives a shit. The waitress moves to take the glass that is slowly suffocating the mosquito, and I give her a look. She leaves it alone and goes to force her sludge on the blonde in the booth behind me.

They hate you Tom. Look at them.

I sip some of the tar in my cup, and will myself to loosen my grip. If Judith calls I won’t do it. If she calls, it will be okay. If she calls, we can make the voices go away for a little while.

With Bev’s chunky waitress frame out of the way, I catch a glimpse of myself in the dirty, mirrored wall under the clock. It’s been three days since I’ve slept, and I look it. Behind me on my right, there’s a nerdy, scared looking guy sitting alone at a table on the wall, nursing a cup of coffee just like mine, and eating a squashed looking waffle. He’s maybe a hundred and fifty pounds, maybe. Looks like a number cruncher.

He thinks he’s better than you Tom. Sure. Got a nice white collar job. Watch him laugh at the pathetic unemployed loser at the counter.

I can see the blonde girl over my right shoulder. She’s pretty, but she’d look better with long hair. All girls do. Doesn’t matter though, I positive she’d be scared of me.

Little bitch. Look at her. Frosted, or highlighted, or whatever shit she’s done. Making herself a piece of meat. Not that she’d give the loser the time of day. Not that you deserve it Tom. You’re a LOSER.

Bev’s not scared, but she’s not a girl, she’s a waitress. That apron goes on, and gender seems to disappear, despite the massive breasts that pull the checkered shirt tight, and the lanky red hair, forced back into a tourniquet bun at the back of her neck. I hear a crash, and the waitress lopes off to deal with it. It’s the skinny guy. He knocked his crummy looking waffle off the table. I don’t blame him. The food here is worse than the coffee.

Maybe he saw you looking at him loser. Maybe you made him so sick to his stomach …

Shut up. Shut up. SHUT UP. It’s as bad right now as it’s ever been. There’s a tiny crunch, and I’ve finally managed to snap the handle off my cup.

They’re hiding their true faces, but they all hate you, Hate You, HATE YOU.

The mantra is in perfect rhythm with my pulse, because it is my pulse.

The mosquito is buzzing a little slower now. There’s only so much air in that little glass after all. I know how he feels. There’s so little good air my coffin I find it hard to breath too. The air goes in but it feels like there’s no oxygen coming with it. There is one thing though, that helps me breathe …

They’re going to laugh at you as soon as you leave. They hate you Tom. HATE YOU.

Ring, damn you. I turn the little phone’s outside window to face me. I’m willing the words “Blocked caller” to come through. She never would give me her number. It’s a shame really. All I need is that voice. Judith’s voice, like sandpaper and chocolate. I left a message at the only number she would share. It’s a TTY service, a “deaf phone”. All I sent was “Tom needs you. Call him.” Those words, transferred to the satin curves of her ears, at least as I imagine them, sounding like something from outer space, telling her my troubles in dull grey letters on a muddy yellow LED screen. Judith. My sponsor, my saviour, my nemesis. I want the silence now. I want the release. I want it. I do. Judith, where the fuck are you now?

Sudden movement in the mirror makes me look up. A heavy guy in a stained trucker cap is getting up.

That your kinda people Tom? A big sloppy drunk redneck? Sure, you’d be right at home with a big fella like that. You and him would be good ‘ol boys together. Right loser? Right useless? They hate you Hate You HATE YOU.

I brush my hand back to where my jacket hangs off the back of the counter stool and feel the too-heavy right pocket swing, and hear the slight clink as it comes back to rest against the metal legs of my seat. Fatboy is first. Unless the phone … rings … right … now.

I lift the edge of the glass. The mosquito flies directly onto the back of my hand. I let it bite. I deserve it. It fills up quickly, my heart is racing. I flex the muscle between forefinger and thumb. Now it’s stuck, but it won’t stop, can’t stop drinking, and it’s too late. It ruptures and blood from the inside of my hand is now on the outside of it in neat little spatters.

I brush aside the tiny body and put away my cell phone. Time’s up.

BIO:
Chris Allinotte is a Toronto based writer. His work has been published on the web at such great sites as MicroHorror, Flashes in the Dark, the Oddville Press, and more. For more details about Chris' writing, check out his blog at http://chrisallinotte.blogspot.com/
Posted by Author at 13:01