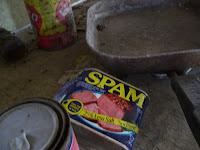 HPD Detective Jake Higa could see that, notwithstanding the tears and makeup running down her face, the young woman standing in front of him was a blond-haired, blue-eyed knockout.

“We'll find your little boy, Mrs. Frazier. But you've got to calm down. Something probably caught his attention and he’s just wandered off. Tell me again what happened.”

All around them the early afternoon crowd swarmed. People were shopping, out walking, heading for the beach or looking for a place to have lunch. Even in the bustling heart of Waikiki where anything and everything could and often did happen, people sensed that something unusual was afoot and more than a few paused to rubberneck or to eavesdrop.

“It’s like I told you before,” Mary Frazier said with barely restrained impatience, “we were just taking a walk through the shopping center. We spent the morning at the beach but Billy was getting hungry and, in any case, I was worried about him getting too much sun.” Unbidden, Higa had visions of Mrs. Frazier in a bikini. “We went back to our hotel, cleaned up and came over here to find somewhere to eat.”

“OK.” Higa, a small man, shifted his weight. They were standing in the so-called “Royal Grove” area of the newly renovated Royal Hawaiian Center. The open-air complex spanned three blocks fronting Kalakaua Avenue and consisted of four levels of upscale retail establishments and restaurants. Originally built as merely a shopping mall in 1980, the Center had been reborn and restored now as something of a cultural showcase. How successful its designers had been in that latter regard was still a matter of debate among the locals. “You're staying right over here at the Outrigger Waikiki, is that correct?”

“Yes. We stopped to watch the hula dancers that were performing on the stage there. I grabbed my camera out of my purse and took a couple of shots. It couldn't have taken more than a minute. Billy was right next to me. When I looked down, he was gone.”

Higa turned slightly when a heavy-set Hawaiian man appeared quietly at his side.

“And your husband is where?”

“I told you, detective, he’s playing golf out at Hawaii Kai. I haven't called him yet. I probably should have but I thought, well, you know.” Mary Frazier began to sob. “I thought that we'd find Billy by now. This was our dream vacation. It’s turned into a nightmare.”

“I'd call him right now, Mrs. Frazier,” Higa said softly. He placed his hand lightly on the distraught woman’s shoulder. “I need to talk to Detective Kanahele for a moment. Excuse us.”

The two men moved off a few feet toward an ornamental lily pond featuring a bronze statue of Princess Bernice Pauahi Bishop.

“No. But I’m not surprised. It’s the middle of July. This place is a friggin’ madhouse. Nobody I talked to saw anything unusual. Besides, there are young mothers and towheaded Haole kids everywhere.”

“Listen,” Higa said as he pulled out his cell phone, “I really think we need to get some uniforms over here and maybe some tech people.” Twenty years on the force and he knew instinctively that the decisions he made in the next moments could well determine whether or not they found little Billy Frazier … not to mention whether or not one aging Japanese-American cop kept his job!

“You can't seriously be considering trying to secure this place somehow, Jake,” Kanahele exclaimed. “What’s the point? If somebody snatched that kid, they're long gone. They could've had a car waiting out on Kalakaua somewhere. Or maybe they walked through the Royal or the Sheraton Waikiki to the beach. If they hoofed it over here through Building B or Building A,” Kanahele pointed over his shoulder, “they'd have come out on Lewers Street and lots of luck with that.”

“I know, I know,” Higa sighed with frustration. “We can't lock the place down but it looks like we'll need to do a thorough canvass. And we've got to do it quickly. Most of the staff in these stores probably started when the place opened at 10:00. It’s nearly 3:00 now. They'll be going home and the next shift will be coming on. By then, anybody that might have seen something will be gone.”

Higa talked on his cell for a few moments and then turned back to his partner.

“The cavalry is on its way. Pray we find the kid and don't have to involve the goddamn ‘Feds. In the meantime, I'll go back and see if I can get anything more from Mrs. Frazier. She must have some pictures of Billy on her camera or her phone. Find the Head of Security. Get him and his guys over here ASAP. We can use all the help we can get. They must have surveillance tapes we can access.”

“I'm on it,” Kanahele said as he strode purposefully away.

The stocky detective headed east toward Building C. It was an especially humid day. The trade winds had died and he wiped his brow with a handkerchief. From speakers hidden somewhere, Israel Kamakawiwo’ole crooned about the beauty of a “White Sandy Beach.”

As Kanahele passed the Tourneau Store with the large analog clocks on the façade showing the time in different cities, he noticed a man dressed as a Fijian warrior sitting next to a big black cooking pot. Arrayed around the man were all manner of mallets, hammers and clubs made of wood adorned with rows of razor-sharp shark’s teeth. The guy was clearly putting on some type of exhibition advertising the island’s world-famous Polynesian Cultural Center.

“Howzit bruddah,” Kanahele inquired as he stepped closer to the man. The Fijian looked up.

Kanahele flashed his shield. “We're looking for a little kid, maybe got lost around here a while ago. You notice a five-year-old boy with straw colored hair wandering around looking for his momma?”

“Nothing like that, officer, just the usual tourists. Mostly Japanese groups and Aussie couples today.”

“Sure is,” the Fijian responded with pride. “It’s been in my family for generations. You know anything about cannibalism, detective?”

“No.” Kanahele was already sorry that he'd stopped to question the guy. He didn't have time for this.

“Well. At least in Fiji, the practice of eating one’s enemies was all about power and humiliation … not food. I've read, though, that some of the ancient kings and warriors really acquired a taste for it. Know what I mean? In fact, I met a famous travel writer here a few years ago … he stood right where you're standing. Anyhow, he had a theory that the reason why so many Polynesians like Spam is because it tastes like human flesh.”

Kanahele thought with some revulsion about the Loco Moco with Spam he had enjoyed earlier for lunch.

The Fijian stood and began stirring the contents of his pot. “They want us to make these demonstrations as realistic as possible. But, obviously, it’s all just for show now, right? The practice of cannibalism on my home island, for instance, stopped back at the end of the 19th century, No cannibals left in the world today, officer. Technology, progress and tourism have seen to that.”

With that, Kanahele thanked the man – obviously somebody who took what he was doing seriously – and continued on in search of the Center’s security office.

As the policeman walked away, a knowing smile played across the Fijian’s heavily tattooed face. He licked his lips and his white, filed teeth flashed in the bright Hawaiian sun.

James C. Clar has published over 100 stories in print as well as on the Internet. Most recently, he has placed short fiction in The New Flesh Magazine, The Taj Mahal Review, Apollo's Lyre, Antipodean Sci-Fi, Flashshot, Shine: A Journal of Flash, The Magazine of Crime & Suspense, Golden Visions Magazine and Static Movement. It's been a very long time since he's eaten Spam ... and likely now to be even longer.
Posted by Author at 13:43