BLOODY BETTY by Christian A. Larsen

Christian brings a touch of class with his TK'n'C horror début. 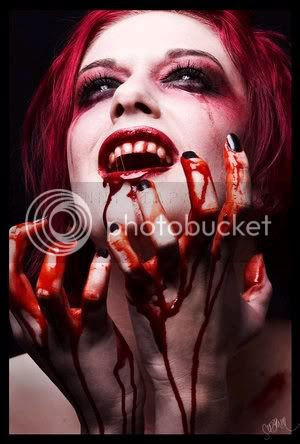 Bloody Betty
Governor Frank Rohrer always worried about his wife, but not out of love. His marriage to her had been as close to arranged as a modern American marriage could be. His political family and her father, steeped in old money, had shepherded their relationship since they were both in college, and while there might be a touch of familiar affection between them, love would hardly be the right word. He had known there was something troublesome and compulsive about her vanity, a trait of hers that bordered on the religious, but it worked on the campaign trail. She was dependable and photogenic, and he tried not to notice her odd behavior too much.

After Frank Rohrer, three weeks from another election, died in a plane crash along with the pilot and his campaign manager, something snapped inside an already teetering Elizabeth Rohrer, and she started a very private, twisted campaign of her own that not even Frank could have ignored, regardless of what it would have done to his political career.

“I like cougars,” said the Asian woman with the silky hair and high cheekbones. She was certainly very young, but legal to drink, and she looked sophisticated enough to Elizabeth Rohrer to wield a cigarette holder, if she chose to smoke.

“Discretion, please,” said Elizabeth, sipping from the edge of her martini glass, leaving a bloom of deep, red lipstick like a calling card in the low lights. “You can call me Betty.”

“Betty,” repeated the young woman across from her. “That's an old-fashioned name.”

“But I'm a forward-thinking woman. What can I call you?”

“Mei … are you going to invite me home?”

“Now who's forward?” smiled Elizabeth coquettishly. “But I meant what I said before about discretion. I'm going to give you an address and directions. You will not write it down or tell anyone where you're going. If you accept, I'll see you there in an hour. If not, well, then it's been nice meeting you, Mei.”

An hour later, the knocker sounded on the brownstone door in a wealthy neighborhood of no neighbors. People knew each other by face, name and reputation, but only knew each other well enough to look the other way to accommodate a drunken stupor, a cocaine high, or an extramarital relationship with a courtesan of either sex. Still, one had to play the game and actually be discreet about it, or else things could fall apart—Elizabeth knew the game too well.

“Come inside,” she said to Mei, pulling her through the doorway and watching the streetlights reflect off her smooth, bare calves.

Mei reached for Elizabeth, caressing the older woman's breast through the black fabric her dress while leaning in for a kiss. Their lips brushed lightly at first, and then Elizabeth received her with an open mouth.

“Mmmm,” purred Mei. “You are delicious.” She stepped over her newfound lover's long leg, and stroked her bare crotch lightly on her thigh.

Elizabeth pushed Mei against the door so hard that her head bounced. She reached down and touched her thigh where Mei had visited her and then rubbed her thumb and fingers together in a circle, near enough to her face to smell it. “You are ready.”

“Yes, I am, Betty,” said Mei, running her hands over Elizabeth's hips. “You are so elegant, so beautiful.”

“Of course not. You could never be called old.”

Elizabeth linked her fingers with Mei's and led her into the bedroom. “You don't know how right you are,” she whispered.

The women undressed each other an article at a time, dropping bras and panties and slingback heels in a breadcrumb trail from the hallway to the bed. The lights were off, but the pale moon glow frosted the edges of the darkness enough for Elizabeth to catch her reflection in the mirrored closet doors. She could still pass for beautiful without others qualifying it with for her age for at least a few more years, but she could see the crow's feet at her eyes, the flat hang of her heavy breasts, and the low bulge of her uterine bump telling the tale of years.

Elizabeth pushed Mei down on the satin duvet and, with a handful of silk scarves drawn from the nightstand she climbed on top of her, forcing her cheek down and hands together. She knotted Mei's wrists with a silk scarf and stepped back to admire her handiwork—the beginning of her handiwork, anyway. A shadow crossed over her face and she froze, gaping at the figure by the window. Her husband had come back. He said he would.

“That's it, Liz, honey,” said Frank, dripping flakes of char and ash on the white pile carpeting. “Once the cable ties are on, the hard part's over.”

Elizabeth pulled a can of multicolored cable ties from under the bed, climbed back onto Mei's smooth, bare thighs and strapped her hands together. Mei protested politely, telling Elizabeth that she wasn't that into bondage, and if they were going to do this, she needed a safe word. Elizabeth didn't hear her—didn't even see her, in fact. She just kept staring at her husband, whose burned flesh crackled as he smiled at her performance thus far.

Exactly as he had instructed.

“What?” asked Mei, her throat tightening. “Who's Frank?”

“Not anymore.” Elizabeth leaned down as if to kiss Mei on the cheek, but came away with a wet, red chunk of face between her teeth. She sucked on it and chewed it as the girl under her screamed under twin blades of agony and terror, blood droplets flecking onto the sheets and headboard as she thrashed helplessly under her torturer. “Your screams are so soft, Mei. Your mouth is too small. Let me help you with that.”

The box-cutter felt warm in Elizabeth's hands as she pulled it from the edge of Mei's mouth to her ear, drawing a line of blood through the perforation. The flesh held weakly until she cut the other side. Mei's scream unzipped the last connecting tissue and her face seemed to split open like a bear trap, the bleached enamel of her molars showing through the blood and gore like the stripes of a candy cane. Elizabeth lapped at the wound, digging her tongue into the ragged flesh, intoxicated and aroused by the oily warmth of Mei's coursing blood.

“That's enough, Liz,” said Frank. He had a blackened erection jutting from his fly. The skin had split and curled, showing raw, pink flesh underneath. Between his squeezing fingers, it looked like a bratwurst that had been left on the grill too long.

“Why do you always remind me of food, Frank?” asked Liz, slicing a mouth-sized slit into Mei's throat.

The young woman's jugular erupted in a fresh geyser of bright red blood. She gurgled through the opening and went rigid, no longer attempting escape, her body pulsing in quick and regular beats. Elizabeth fastened her mouth to the wound, rocking back and forth over the opening and sucking it dry over the course of several long minutes. When Mei was empty and cooling, Elizabeth stood up, covered in sticky blood.

“Do I look younger now, Frank?”

“I clean this mess up, shower off, and dig that little black dress out of the back of the closet—that one you always liked.”

“Not … exactly. Besides, Liz, how can I take you out for a night on the town … looking like this?” The least corrupted of his flesh looked like charcoal briquettes. One eye had melted shut and the cracks in his dried out skin wept blood and lymph. “We have to be together.”

There was a pounding at the door.

Elizabeth turned around, stunned as much by the sound as at what phantom Frank was telling her. She had completely misunderstood.

“Mei! Mei! Open up for your father! You leave that kusamanko and come home with me right now. Mei! Mei!”

Elizabeth crept into the foyer and peeked outside the sidelight by the front door, her feet tacking to the hardwood with drying blood. A dark haired Asian man stood on the stoop under light holding an aluminum baseball bat in both hands like an automatic rifle. The tension in his shoulders matched the anger in his face, and Elizabeth knew he wouldn't be leaving without at least seeing his daughter. But she had to try, anyway, despite what Frank intended.

“Go away before I call the police,” she called through the glass. “There's nobody named Mei here, and you're waking up my neighbors.” She was glad she didn't have to lie. Mei wasn't here—anymore. Just a bunch of blood and guts she used to live in.

“I know she's in there,” said Mei's father, squeezing the bat like Frank had his penis. “I triangulated her cell, followed her, and watched her go in not a half hour ago. You tell my daughter to come out, or I'm coming in!”

Elizabeth ran back to the bedroom. She didn't know what to do, and while Frank had orchestrated this disaster, she had nowhere else to turn, but when she actually got there, Frank was gone.

Glass shattered in the front hall. Elizabeth didn't have to look out of the doorway to know that Mei's father had smashed the sidelight with his bat. The door swept inward, and the glass crunched under leather shoes.

“Get out of my house!” screamed Elizabeth in one last bid. She had no chance of killing him if he came into the bedroom. She had always thought guns were too dangerous to keep in the house.

Mei's father stormed through the door. “Where's my daughter?” He knew the answer before he finished asking the question, but finished it out of form. His only daughter lay there on the bed, raped, ripped and drained. She was obviously beyond help, but not vengeance. He brought the shining, aluminum bat up to his ear, pausing just a moment to read the expression in Elizabeth's eyes.

I guess I won't be getting any older, thought Elizabeth just before the barrel of the bat exploded her skull.


BIO: Christian grew up in Park Ridge, Illinois and graduated from the University of Illinois at Urbana-Champaign. He has worked as a high school English teacher, a radio personality, a newspaper reporter, a musician and songwriter, and a printer's devil. His short story “Bast” appears in the anthology What Fears Become: An Anthology from The Horror Zine, available this fall from Imajin Books. He lives with his wife and two sons in Kenosha, Wisconsin. Visit him online at exlibrislarsen.com.
Posted by Lily Childs at 09:52