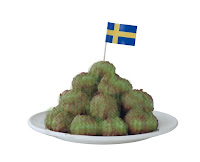 Small Green Things
Patrick stared at the small green orbs on the table, and had the uncomfortable feeling they were staring back at him. They looked like some distant cousin to a Swedish meatball, if it had thrown up on itself and then been left on the shelf of the fridge for three weeks.
The odour coming off the things was equally repellent. They reeked of muddy, rotten plants more appropriate to a bog than a red Formica kitchen table. They were leaning against a limp mound of pasta that looked forlorn at the unwanted contact.  Steam was coming off them, making the air waver slightly just above the plate, like stink-lines in a cartoon.  Patrick yelled to the next room where his wife Andrea was assembling a new bookcase using only her wits and the enclosed Allen wrench.
“Honey, what’s this on the table?”
“What do you think it is Patrick? It’s dinner.  Actually it’s your dinner.  No, on second thought, it’s what’s left of the dinner I made to be ready an hour and a half ago, because you didn’t inform me you’d be going for beers after work, and coming home late. In fact …” She continued, on a roll now, but her tone didn’t change much, so Patrick assumed she’d finish this last bit and go on with her tinkering.  Still though, he had a rather pressing question that needed an answer.
“Really Andrea, what is this stuff?”  Patrick’s tone was incredulous, but annoyance wasn’t far away either.  His wife often would start a fight to get out of admitting fault, and the food on the table was definitely someone’s fault.
“Jesus, Patrick, it’s not bad enough you’re late, you’re going to insult me too?”  Andrea’s response was quick, and the hurt in her voice made him feel immediately guilty. “It’s spaghetti and meatballs, you jerk.  What does it look like?  If you don’t want to eat the … goddamn it, it’s the unfinished side again. Look, just don’t eat it.  Go back to the bar with your buddies.”
“No. No, it’s fine really Andy, I’m going to eat it,” said Patrick.
“It … just looked like something new is all.”  And it certainly doesn’t look like spaghetti and fucking meatballs, he finished to himself.
“Eat us,” the things seemed to say, “Come on Patrick.  You’re hungry.  Have a bite to eat.”  He must have been hallucinating, because the voices seemed real to him.  They spoke again, and their voices were heavy and wet, like bubbles in a swamp, repeating, “Eat us Patrick.”
Andrea wasn’t paying attention anymore, having gone back to swearing at her assembly project.  Looking closer at the plate, He thought there was less pasta now.  Were the meatballs eating the spaghetti? Ugh, he thought.  Andy was a wonderful wife, but she’d never be  a great cook.
Without warning, a feeling gripped him that he was going to eat them. Oddly enough, Patrick was reminded me of the last time he was on a diet.  He’d spend the whole day deliberately avoiding snacks and sweets, and yet by three-thirty he’d find himself feeding quarters into the candy machine, and pushing F8, for the three-pack of jumbo chocolate chip cookies.  It was like being on auto-pilot.
Patrick's thoughts came back to the present, only to find the first glob was inches from his lips.  He could already taste the foulness at the back of his throat, as its odour preceded it.  Patrick turned his head, and took a deep breath, meaning to choke the thing down quickly.
Why? something in his mind screamed, Why are you eating it at all?  Patrick opened his mouth, keeping his lungs locked tightly around the last gasp of air, when he suddenly noticed something new.
There was another smell coming in on top of the marsh plant stink, a succulent, greasy tang.  Patrick let his breath out in a whoof, and gave a proper sniff, just to verify what he suspected, and he was proved right.  This disgusting looking blob of muck now smelled almost exactly like Dirty Roy’s Firehouse chicken wings.
It wasn't possible, but the tangy, spicy scent was overpowering.  Patrick sucked back a small runner of drool, as his tongue and taste buds aligned at the thought of crispy orange drumettes soaked with Roy's secret pepper sauce.
Without giving him another opportunity to act, the green thing pulsed once in Patrick's hand. Powerless to resist, his hand moved on its own, cramming the foulness into his mouth.
He swallowed.
It was clear at once that the enticing aroma had been a ruse.  It tasted like the foot of a drowning victim, dipped in shit.   Despite its wet appearance, all the moisture seemed to have left his mouth in an instant, and Patrick was left gasping through a throat lined with fine, mouldy powder.  His stomach was in agony,  It clenched and roiled in protest, and there was a sensation of exceptional dryness – as if the thing had sucked up all the stomach juice as well. It made vomiting the thing back up an impossibility -- not for lack of trying.  Patrick's knuckles turned white as he gripped the table and dry-heaved.  Andrea no doubt took the noises as a final criticism of her culinary skills, as the sound of the TV got louder.
And then Patrick ate the other two.
Spots swam in front of his eyes.  In extreme discomfort, he welcomed the sensation. Yes – please, let me pass out, he thought, let me not be feeling this.  Seconds later though, the spots disappeared, and he became conscious of the changes happening within.  The green orbs were growing, distending his stomach as they swelled.  At the same time, Patrick felt a horrible tearing, probing sensation.  The things had grown tendrils and were exploring his insides, looking for somewhere strong to take root. He went to his knees, doubling up with pain.
From the other room Andy's voice drifted through the haze of intense pain.

“Shit!" she cried, "They never give you the right number of screws. Never!"  Patrick could hear her crossing the room; his hearing had become exceptionally keen.  "I’m going out to the hardware store Patrick." said Andrea, "See you later – if you’ve survived, that is.” And then, slightly lower, “Jerk.”
The door banged shut and Patrick was alone with his invaders.
The feeling as roots spread out, searching and coiling around intestines was more than he could bear.   He gave vent to one long continuous scream, which devolved into sobbing for it to please, please make it stop.
One thick tendril wound its way up the back of his throat, being careful not to choke him, and continued up into the sinus cavity, where it went rigid, jamming itself into his brain, and Patrick knew no more.
***
When she arrived home, Andrea was in a fouler mood than when she’d left.  It turned out that not one of the major “do-it-yourself” stores carried the unique, hex-head bolts that she needed to complete her new genuine black-walnut-veneer Entertainment Center.
She’d gone to three stores, and after hearing, “You’ll have to go back to where you bought it” She’d given up, on the verge of screaming.
The screen door that Patrick hadn't fixed yet banged open loudly on its broken hinge.  She stormed inside.  Her immediate plans were a cold beer and the last half of “Survivors who Think They Can Dance”.  When she gained the kitchen, she stopped in her tracks.  Patrick was still sitting at the kitchen table, staring at an empty plate.
“So you choked it down, huh?”  She didn’t want to be so angry with him, but sometimes he just pushed her buttons. “Well? How was it?”
Patrick turned his head as if it was on a slow-motion swivel, and at last he met her eyes.  His mouth opened a little, and after a too-long pause, he said “Good.”  It sounded like he was speaking through a particularly hoarse throat, so it came out more as a croak than anything.
Something was deeply wrong with him, and Andrea felt the majority of her anger dissipate in an instant.  “Patrick? Are you alright?”
His gaze never wavered.  He stared at her intently with eyes that seemed dull to her, his jaw dropped open long enough to make the sound, “Good,” again.
“No, Patrick, I don’t think you are.”  She moved toward the table.  If he was sick, it would be on her again, to drag him, kicking and screaming to the doctor.  They were so not ready for kids.
She moved to his side, and he turned to look at her.  Again, the movement was slow, and delayed, like he was moving through sludge.  She felt his forehead.  It wasn’t just cool, it was positively cold.  “I don’t know what’s going on Patrick, but I don’t like it.  You sound like you’re getting a bad cold.  Let me see your throat.”
As soon as she’d said it, she wanted to un-say it.  She didn’t want to see his throat.  This close, she saw into those dull eyes, and was shocked to see something moving -- swimming -- in his pupils.  His jaw gaped open, and kept opening long past the limits of what was normal.  She saw his tongue, darker than it should be, waggling in the dark.
She had time to scream once, and then a massive cluster of tendrils vomited forth from his mouth, wrapping themselves around her head, throat, and chest.  They sought entry, and before long found it. She tried to cry out again, with a closed mouth, but to no avail. The tendrils were persistent, and they found what they were looking for.
***
When Andrea awoke, she found Patrick waiting.  They were blissful once more.  They would never fight again, or annoy one another with sarcasm and cynicism.  They were one.  They were one with the Everything.  The Everything would bring its bliss to this world, and the plants would reclaim the planet from the meat-things.
Patrick said, “Good.”
Andrea replied, “Good.”
As they left the house, and moved off into the night, the only trace of their presence that remained was three small, oddly textured green orbs on a plain white ceramic plain ceramic dish, calling out to any who could hear, “Eat me.”
Bio:
Chris Allinotte lives in Toronto, Canada, with his wife and children.

His work has been featured in many places online, and recently in the anthologies "Novus Creatura" and "Creepy Things".  You can check out more about Chris' stories at his blog http://chrisallinotte.blogspot.com.
Posted by Lee Hughes at 13:09