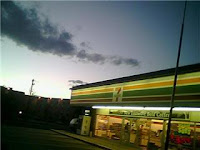 
Dorothy yawns behind the register. Takes her time to close her bottom jaw. Ms. Lorraine has on her cat sweater. Black with sequins and yarn stitched throughout, sparkling but ugly. The door opens once or twice, the bell is the store’s heartbeat. The employees at Walgreens on Pulaski are it’s blood cells.

“The plastic bags are just totally blowing our budget,” comes in Ms. Lorraine who is 45 and uninteresting. A forced relationship that Dorothy pets like a neighbor’s cat. Dorothy hates cats. Ms. Lorraine has seven of them. Dorothy knows this because Ms. Lorraine has no children, only cats.

She offers a look that suggests agreement, but finds it to be from a part of her that would rather be doing a million different things.

“Almost half of it. Totally,” again, but she leans onto the counter this time. “You do have to admit.”

“Totally,” Dorothy pours out, over the electronic bell above the door. They stand nodding slowly to one another before Ms. Lorraine says, “Photoshop,” and nods to the right of the store and leaves.

Fluorescent light. Smooth, jazzy covers of Lou Reed and Aerosmith. Fiddle Faddle and Good Housekeeping. With nothing else to do, Dorothy examines the magazine rack adjacent to the candy bars; decides to jump into something else.

Quick, sure footsteps approach the counter. Dorothy hears, but waits to react. Then, she throws the box of tampons on the counter, right in front of Dorothy.

"How much," she demands imperatively. Dorothy looks up from her distraction (the current issue of Played -- the hip new rag detailing the lives of misogynistic celebrities and their budding romances with young starlets) and stares into the bare chest of her adamant customer.

"...Miss, where is your shirt?" she asks, feeble. The intensity of what is about to happen is too much for Dorothy.

Dorothy looks to her right toward the Photoshop where Ms. Lorraine, is helping another customer and tries to get her attention by widening her eyes.

The cashier turns and is met by a 10 inch .44 magnum pistol -- it's cocked and an inch from her nose. The woman’s profile suggests nothing but there is something in her voice that registers a shortness in Dorothy, like she cannot bring herself up to speak characteristically.

"$6.95," Dorothy manages through crippling terror. A soundless laugh comes from the nostrils of the girl with the gun.

"Nah," she says, a new cool stapled to her voice.

She pulls the trigger and watches Dorothy’s head explode, brains painting the cigarettes behind her pink. She lets the arm that carries the gun fall to her side as she turns and walks out the automatic door, picking her ear, leaving the tampons. The shot remains in the store, resonating; killing the rest of the customers. Overhead, the hidden speakers play a song from the radio; simple strings and harmonies. But after the fact, everything is silent.

Outside in the parking lot a car waits, idle. The customer gets in the passenger side and buckles her seatbelt. "You were beauty, baby," the driver says with slick affection.

"Yeah..." she replies concentrating on the power flowing through her. The driver puts the car into gear and exits the parking lot at a moderate speed, joining traffic, blending in.

"You remember what I said about you the other day?"

"Yeah, I remember," she replies, half a smirk blossoming on her profile. "You said I got the best pair a tits you ever seen."

BIO:
Dennis Ryan writes with his balls as much as his brain. A deviant disciple of debauchery, his words will stick chilly fingers into your innards and leave you gasping like a smoking gun. A student of fiction at Columbia College in Chicago, he aspires to abolish innocence and lurk in your brain, feeding you secrets.
Posted by Author at 08:46