OLD DEAD MARTIN, IN MY COAT by Pete Risley 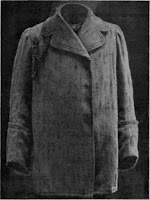 Old Dead Martin, In My Coat

Here's something I never told anybody. You remember Cheryl's brother Martin, the one who died way back when, before we lived out here? I saw him two winters ago, going through our garbage cans in the backyard. I'm sure as hell glad it was me who saw him, rather than Cheryl or one of the kids. Though come to think of it, they wouldn't any of them remember Martin. The kids, I mean. What? No, it was definitely him. Wait, I'll tell you.