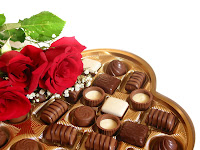 
“Ms. Carol is so pretty,” Alan Rosback whispered. He wasn’t even aware he’d said it out loud.

Self conscious and slight, Alan sat hunched over in a classroom desk that was placed just the way he liked it--two rows away from the door, four seats back--just enough to blend in, not quite far enough to stick out.

The object of his attention was at the front of the room, wide eyes sweeping the class of fifth-graders with the gleam of a proud parent. She cocked her head slightly, a mischievous grin spreading across her face.

From beneath the tangle of his bangs, Alan’s eyes crawled over Ms. Carol, catching and soaking up every detail. The way her lips were highlighted by her snug pink sweater. The stray strands of hair falling across her forehead like spun gold. A heart shaped broach reflecting shimmering darts of red light.

Her next words were spoken through a perfect smile. “All right then, you can open your cards now.”

All around Alan, kids dug through Valentine’s bags cobbled together from colored cardboard, and suspended from the front of their desks by ragged lengths of Scotch tape.

Alan simply stared up at Ms. Carol. As she strolled between the rows toward him, he marveled at the way her red skirt swept across her hips and legs.

Breathing in the sweet vanilla of her perfume, his mind drifted.

“Aren’t you going to open any of your cards, Alan?”

Alan blinked up at her, and his stomach rolled over in a way that was both fantastic and terrible. She was gazing down with a look so unlike any of his other teachers--not the least bit impatient, but simply and honestly curious.

“Oh, sure” Alan mumbled, and watched her as she wandered away.

“Okay,” said Ms. Carol, addressing the class from behind her desk. “It’s just about 3:30, so why doesn’t everybody get ready to go?”

A moment later, the clang of the school bell echoed off the walls. As quickly as they had scooped their Valentine’s treasures from their bags, boys and girls shoveled them back inside. Alan moved slowly in the midst of their hustle, delicately putting his cards away, one by one. Most kids had raced from the room before he was halfway done. All were gone by the time he finished.

Alone and unnoticed, he watched Ms. Carol place an envelope carefully atop a stack of papers on her desk. It was the color of the seats at the donut shop, Alan thought. So pink it almost hurt to look at it. He leaned forward, his mouth dry, the neck of his favorite sweater itching.

Wiping his clammy palms across the legs of his jeans, he wrapped them around what he’d hidden inside his desk first thing this morning.

It would have been terrible if Ms. Carol had seen it, and even worse if any of the other kids had gone snooping.

He’d had to be extremely careful.

“One, two, three,” he counted, and lurched to his feet.

With the surprise clenched behind his back, Alan shuffled up the aisle towards her, his lips tightened into a cut across his face. Less than a foot away from her desk, he could feel his heart slamming against his ribcage.

Unaware, Ms. Carol caressed the smooth surface of the envelope.

Alan opened his mouth to say something, but all words were trapped at the back of his throat. His mind raced, desperately wishing. All she had to do was glance up and see him standing there. All she had say-

“Alan?” Her gaze settled on him, slightly startled. Worry narrowed her eyes.

“Is everything all right?”

Alan hesitated, blushing. So much for practicing the night before, he thought.

Over and over again he’d rehearsed in the bathroom mirror, even as his big sister Jenny had pounded on the door and started yelling for his dad. For a while she screamed so loudly, Alan had to jam his hands over his ears. He realized he’d catch a beating eventually, but he also knew it was payday. Dad wouldn’t be back home till long after two, so the bathroom door stayed locked.

Now, despite all that effort, Alan was left stammering, feeling his face burn as Ms. Carol’s eyes peered over one of his shoulders.

“Alan, you forgot your Valentine’s bag.”

Alan didn’t care about the bag, nor any of the cheap paper cards in it. All he cared about was the woman in front of him, and what he grasped in a slippery grip.

Alan shrugged. He thought of the how he’d seen his dad that morning--sprawled across the couch, his custodian’s jumper pinned to the floor by a dozen empty Budweisers and a puddle of puke. Thinking about that ruined the moment.

Besides, the weight in his hands was getting so heavy...

“I-I just wanted to tell you…” He stopped, staring at the tips of his toes, squirming in his scuffed loafer.

The words hung between them, as if suspended in red print across the streams of late afternoon sunshine beaming through the windows. To Alan, the room was suddenly clearer, the colors brighter, edges sharp and solid. And in the middle of it all was Ms. Carol. For the first time Alan noticed flecks of hazel in her eyes, and the lavender polish on fingers that fidgeted with the pink envelope.

But her expression didn’t change at all, and when she spoke, the rhythm of her words was slow and careful.

Alan squirmed, his hands still behind his back. This had been the moment he’d been imagining since the school year had started. He’d fantasized about it until his stomach had twisted into a ball of steel, but he’d never imagined her responding like this. Not at all.

He had to start again.

“Alan.” Her voice was still kind, but firm, and oh so cautious. “You know, it is very common for students to get crushes on their teach-“

“No,” snapped Alan. Tension pulled his shoulders back, bracing his legs like steel turrets. “This is not a crush. That’s...”

His eyes wandered the room as they searched for the word, and then settled on Ms. Carol again. “Crushes are childish. They’re for littlekids.”

“Alan, I know you’ve been through a lot this year with your mother.” Ms. Carol paused. “And perhaps you’re just a bit confused.”

Alan’s head lowered. “I’m not confused at all.”

The muscles in his shoulders tensed, his arms bunching as his hands clamped and twisted behind his back.

Ms. Carol craned her neck, straining to see what he was holding. “Alan, please don’t misunderstand me. I care about you very much, but it’s the same way I care about all my students.”

Ms. Carol flinched, and Alan softened his voice, almost speaking in a whisper.

“I just thought that you-“

She shrugged, looking almost embarrassed. “I am 28 years old, Alan.”

Alan’s shoulders collapsed. “So I guess that...”

“There are plenty of other nice girls you’ll be meeting soon enough, Alan.”

Alan’s insides felt hollowed out, as if someone had used an ice cream scoop to spoon out his guts. “I don’t care about any other nice girls,” he mumbled.

“That will change, believe me.

Alan’s voice was hoarse. “I guess.”

“Alan, what are you holding onto?”

Alan’s lips quivered, as if several potential answers were wrestling behind his lips. He shot a glance at the clock. When they returned to Miss Carol, her eyes were flashing for the door.

Scared, Alan thought. She looks scared. He closed his eyes, leaned back on the heels of his feet, and began spitting words out in whispers. “Maybe. Maybe not. Maybe. Maybe not.” In the dark he heard the cry of a chair scraping across linoleum, and the squeak of footsteps as Ms. Carol rounded the desk.

“Alan?” Her voice came from directly in front of him. “Alan!”

Alan rocked back and forth, eyes still closed, lips fluttering.

Alan snapped his eyes wide, the decision made. His right hand swung out, a shadow trailing it, the gift black and gleaming.

And then she finally saw. Relief softened her wide eyes, and her lips curled up in a shaky smile.

Alan nodded and held the box out for her. A stack of chocolate squares under the arch of a rainbow adorned the cover.

“It’s okay. I get one for my teacher every year.”

She took the box gingerly. As she put it down her desk, Alan nodded towards the card she’d been holding.

“Is that a Valentine?”

“And two tickets to the opera.”

Alan nodded, another decision made. ”Well the chocolates are for both of you.”

Ms. Carol’s pleased smile made Alan’s heart ache, but deep down, he knew this
was the right thing to do. He could feel it.

She lifted the boxes lid, and it slid smoothly off the bottom. “How about we have one right now?”

There was the crinkle of parting paper, and the rich, velvet fragrance of milk chocolate was as welcome as a favorite blanket.

Ten minutes later, Alan closed the classroom door behind him. As he walked down the hall, his nostrils were stung by the stench of disinfectant on freshly mopped tile.

It reminded him about what he’d injected into his chocolates that morning.

As he reached the front door, a voice froze Alan’s fingers on the handle.

“Where do you think you’re going?”

Mrs. Young, the school’s new grade six teacher, was bearing down, her black hair stretched back by a clip’s teeth, her legs pumping as if driven by pistons.

“There,” she said, pointing to the floor just behind him. “Is that for you or the garbage?”

Alan followed her finger to the plastic baggie that had fallen from his pocket, so handy for the few chocolates left after Ms. Carol had collapsed and crushed almost everything else.

“Sorry about that,” he mumbled, shoving the bag back in his pocket.

Mrs. Young’s tone lightened. “Well, we all get a little careless sometimes.”

As the door banged shut, Alan stood silently in the hallway. His fingers rolled and squeezed the chocolate between them.