THE MISFORTUNE TELLER by Gavin Bell 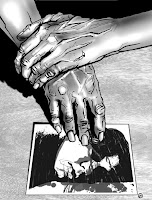 The flat was located in a minor street off Govan Road, around twenty minutes walk from the pub. The rain showed no signs of abating. Miller stopped at the door to the close and ran his finger down the nametags next to the buzzers. Phillip Rodden: 3C was the tag he was looking for. He let his index finger hover over the buzzer for a moment before changing his mind. He walked around to the alley at the side of the tenement block. A rusted steel fire escape snaked up the sandstone wall like dirty brown ivy.
Miller scaled the dripping, creaking stairway until he reached the third floor. The C flats were all at this side of the building; their windows accessed the fire escape. The window for 3C was open a couple of inches for air. Despite the deluge, the city was unseasonably warm tonight.
Miller pulled the window up the rest of the way and stepped into the living room. It was even more deserted than Singer’s had been, but the TV was on. A graveyard-slot sitcom spewed its canned laughter out at an unoccupied threadbare couch. On the couch lay several items: a woman’s handbag, a leather wallet, a decent-looking watch, a comb in need of dental treatment. Miller was betting that only one of these items rightfully belonged to the flat’s occupant. He scanned the rest of the room, eyes alighting on a novelty telephone moulded to look like a bowling ball. He put in a call to Bendis, giving him the address and telling him to be here in ten minutes.
Miller heard a toilet flush behind a door and moved silently to the blind side. The door opened and a skinny, balding man wearing a tattered black t shirt and boxer shorts stepped out.
“Flip, how’s your girlfriend?”
Flip spun around, his mouth open to say something. Miller broke his nose and put him on the ground. Miller pulled out his ID and dangled it over him. Flip eyeballed it, then shifted his gaze to take in the purse, wallet and watch on the couch. His next furtive glance was in the direction of a charity shop chest of drawers in the corner. He looked from there to Miller’s bulky frame. His shoulders tensed, then relaxed in submission. Miller smiled and replaced the licence in the pocket of his coat. “You want to know what it was?”
Flip looked around, resignation breaking out on his face like a skin condition. He shrugged.
“That deck of cards you used to flash around in Singer’s. You know, the one you had custom made with your ex-girlfriend on them. Snapshots of her in all kinds of athletic poses. Know where those are by any chance?”
Flip leaned back against the wall. Drained and ready for the cuffs. “Naw, man.”
“Well, I can’t account for the other fifty one. But the queen of hearts is currently lying on a coffee table on the other side of town, covered with blood. Combine that with the fact you’re in possession of stolen goods from the crime scene…” Miller pointedly looked at the chest of drawers in the corner “…and I’m assuming you are in fact thick enough to be keeping the murder weapon here…” Miller shook his head sadly “Doesn’t look good, does it Flip?”
Flip looked up from the floor and shook his head. Miller walked over to the couch, picked up the comb and tossed it in his direction. “They’ll be here in a minute. Better pretty-up for the mug shot.”

Back in his flat above Argyle Street, Miller was towelling off his wet hair.
“Playing cards, huh?” Bethany said.
“Playing cards.”
“Good to see you still have the gift, Jack.” She smiled.
Miller sat down on the couch beside her. “Actually, I ought to thank you for that. I didn’t need the party trick this time. I just needed someone to make me see what was right in front of my nose.” He turned his head to face her, gazing into the hazel eyes, and returned the smile. A real one this time. Bethany leaned in and kissed him softly on the lips. The kiss felt good. As good as it felt to be a real detective again for a night. As good as it felt to use his more prosaic gifts again.
“I have to go now,” she said.
He sighed “I know.”
Miller lay back and closed his eyes. When he opened them, she was gone. He got up and collected the crime scene photographs into a bundle, tapping it square on the glass coffee table. He walked over to his desk and pulled a folder out of the file drawer. He put the most recent black and whites in at the top, and then flicked back through the folder, pulling out the section dated 1997.
He ran a delicate finger over the first photograph. This one was monochrome too, of course, but he knew the girl in the picture was wearing a deep red blouse the colour of a fire engine.
Bethany looked good in black and white. Better than most.

Bio:
Gavin was born in Glasgow in 1979. He has worked as a petrol station attendant, taxman, salesman, research manager and pizza boy. His story ‘A Living’ was shortlisted for the 2007 Get Britain Reading prize, and published in the Sun Book of Short Stories, and his other stories have been published in Scribble magazine and First Edition.He currently lives in Hamilton with a wife, a daughter and a growing pack of bunnies, and is at work on his first novel, a thriller entitled Halfway to Hell.
Posted by Author at 19:57