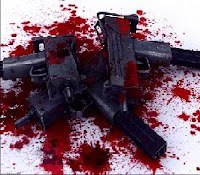 OK, so this one stretches the word count parameters a little...
but it's well-worth it...

BIO: Kieran Shea can’t stand the hard rain Dylan said was going to fall, yet oddly enough he walks in it for inspiration. He blogs at Black Irish Blarney.
Posted by Author at 14:53