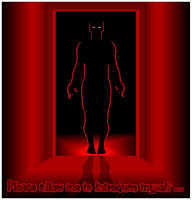 Here is a creepy one for you.


The amount of money I stole from my employer was insignificant to them, a rounding error that they should never have even noticed. Had they involved the police? I didn’t know – my boss simply said the needed to see me downstairs in HR.

My eyes were stinging from the salty perspiration that flowed off my forehead. I couldn’t stop sweating. The air-conditioning in our building was usually bad but today, the hottest day of the year, it was totally non-functional.

I’d been sent downstairs to meet with the head of HR, Mr. Cipher. 15 years with the company and I’d never seen Cipher, let alone met him. Personnel, now “Human Resources” had a shit reputation and Cipher was known to be a ruthless bastard, a stooge for the big-cheesers.

Those sent down to meet him never returned to their offices so I expected the worst. I just couldn’t figure out how they caught me.

The elevator broken, I descended thirteen flights of stairs to the subterranean offices of HR and the feared, yet seldom seen, Cipher.

My shirt soaked thick with perspiration stuck to my back like spackle; I could smell the acrid sulfur, rotten-egg-like putrid stink of the building’s furnace firing up in July. I’d be glad to be escaping this place I thought.

What was a few hundred dollars a week that wouldn’t be going to those welfare cheats – what was the big deal?

Yes we were a state-funded social services agency that was established to be a last resort source of funds for society’s poorest.

These were crack-whores and their babies for the most part– what was one or two less on the public dole?

I needed the cash. My debts were closing in on me, I couldn’t help that I’d had an incredible string of bad luck with the ponies; it was bound to turn around.

As I got closer to Cipher’s hallway, the heat became more stifling. My throat got dryer by the step. Would the cops be waiting with him?

Had they found out about the embezzling at my church as well? Jesus, all those do-gooders made me sick. Sending monies to Africa and those orphanages.

What about ME, I have needs too damn it!

I was beginning to get nauseous and faint, the heat was unbearable, it had to be over 100 degrees in the basement- weren’t basements supposed to be cool?

I opened the double doors to HR and standing with his back towards me was a hulk of a man I determined to be Cipher. He was imposing and I couldn’t even see his face. Easily 6’6” tall his jet black hair was completely slicked back into a pointy duck-bill that rested on the nap of his neck.

Hearing me come in he began to turn around. I was relieved at not seeing any police; I decided to speak first and introduced myself and asked if I was here to be fired.

Facing me now, his eyes were steely and black as was his suit. He stroked his pointy chin and then spoke:

“Welcome,” he said “I’m Mr. Cipher, Lew Cipher. Fired? With your talents? Not at all, I expect you’ll be with us a while, a very long while.” he laughed viscously as his nostrils flared and just a wisp of smoke came out of them. “We have a special little place here just for you!”


Michael J. Solender is a freelance writer based in Charlotte, NC. He writes a weekly Neighborhoods column for the Charlotte Observer and NEVER runs with scissors. His fiction has appeared online at 6S, Powder Burn Flash, A Twist of Noir, Flashshot and Dogzplot (soon). He blogs here: http://notfromhereareyou.blogspot.com/
Posted by Author at 16:39