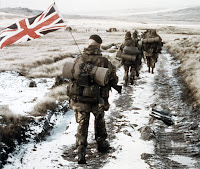 Legless Johnny we called him. As a kid he was always falling down, tripping over matchsticks. It wasn’t really a joke, if you saw his scarred knees. Because he kept on falling, the name got twisted into a nickname. He wound up Leggy, never Johnny. Leggy Merrick sort of rolls off the tongue, too.

He always hung around with Doug Jameson. Same age, give or take a couple of days, same height, same background. One blond, one dark, the two heads always together, mischief making.

Doug was good at sports. To see the long length of him flying over the high jump bar, throwing himself across the goal mouth, it was a sight anyone would be pleased to see. Leggy stood on the sidelines and cheered him on. As far as we knew, he never envied his friend’s ability to stay upright on two strong legs that hardly saw a graze or a plaster throughout their growing years.

Teenagers together, they roamed the local streets, Leggy falling into the gutter sometimes, as the kerb seemed to get between him and his next step. Doug would laugh as he helped him up, dusting down his clothes, nursing the bruises.

When they were old enough to drink, Leggy’s nickname became the butt of many a bar joke. Not that we ever saw Leggy drunk. He just kept on falling down. And laughing about it.

He was lost when Doug was picked by the trainers for serious training. Doug’s was a talent too good to be passed over; what with running and jumping, he was an all round athlete. Training kept him busy for hours and Leggy couldn’t keep up with him. He tried pacing Doug on a bike but fell off so many times it was a disaster. So he stayed home, watching from the sidelines again, cheering from the safety of a settee in front of the TV set. Never so much as a look or word said he might be jealous.

Leggy joined the Army suddenly. No-one knew anything about it until he came home wearing uniform, looking tall and proud, every inch a man. Uniform suited him, gave him stature, confidence he hadn’t possessed before. We watched and wondered at the change clothes can make to a man. We waved goodbye when he left for training in the depths of Scotland and mailed clippings of Doug’s successes to him.

“Thanks,” he wrote back. “I’m keeping a scrap book so keep ‘em coming. Life here is pretty tough but I’m enjoying it. See you all soon.” It was signed Johnny Merrick. Someone said “Old Leggy’s gone back to his real name.” We started our letters “Dear Johnny” after that. It seemed strange, like writing to a stranger.

Sometimes, when he came home on leave, talking Army slang and reminiscing of places we could only guess at, he seemed like a stranger. But at heart he was good old Leggy, ready to stand another round and grin at the chestnut jokes.

Doug’s training or overseas competitions rarely coincided with Leggy’s leave, so they didn’t see each other much. They wrote and Leggy kept up the scrapbook, cheering his friend on long distance. When the Falklands war started – and we called it a war, no matter what the cocksure politicians said – old Leggy went. We caught a glimpse of him shouldering his pack up the gangplank onto one of the hastily converted ships, envying him his adventure, even if he was going into danger. Good old Leggy, off to do his bit for Queen and country while we stayed at home and worried.

Doug lost a race or two, said it was ‘nerves’ but we knew he was worrying as well. Despite that, the medals framed over his fireplace grew steadily, an impressive display.

Letters from the Falklands were few and far between and then there were none. We wondered, but didn’t ask. When the ships came home, escorted into harbour by tiny tugs and pleasure yachts, we searched our TV screens in a desperate attempt to find old Leggy’s face up there among the smiling sailors on deck. He wasn’t there. He wasn’t – was he? Not old Leggy…

Then we met him, propelling himself down the road in a wheelchair. Old Leggy, face drawn in lines no ordinary life could give, touches of grey where he’d been all darkness and the awfulness of a rug that covered yet revealed all.

Not a word was said. We all called him Johnny and bought him a drink, remembering the jokes and saying nothing. It wasn’t the same and he knew it. After the second round he excused himself and we let him go. As the door shut after the wheelchair, someone said:“Let’s all be glad it wasn’t Doug.” And we all nodded into our drinks. Unthinkable. Doug, the brilliant athlete, training for the Olympics. After all, we said wisely, Leggy’s legs hadn’t been much use to him, had they?Leggy didn’t do much at home, just sat around. Sometimes he’d clean his Dad’s collection of antique pistols and look at his scrap book.

The story went round like wildfire, as these things do. Doug had come home with yet another medal and gone round to see old Leggy. As coincidence – or Fate – would have it, Leggy was cleaning the pistols. When Doug walked in and said “Hello. Leggy,” Leggy shot him.

There are those among us who said he should have gone for the heart. The rest of us said it was poetic justice.

No matter now what Leggy might or might not have intended – he shot Doug in the kneecap.

http://www.oneinspecyal.com/
Posted by Author at 22:42