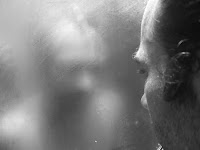 Halloween's coming, and here's a great chiller to get you in the mood...


The old man they had dubbed “the priest” sat in the shadows on the edge of the circle, sipping chocolate, listening to the conversation, but not participating.

The old man fired Harry Stryker’s curiosity and his reporter’s instinct made him want to draw the man out.

Most of the afternoon, their talk had focused on the supernatural. They sat through the gloomy hours before the fireplace, drinking mugs of hot chocolate or toddies, smoking and confessing tales each had previously kept locked in the private closet of mind and heart.

Perhaps it was the weather, gray and dreary with periods of heavy rain that melted the last of the snow and kept them inside and apart from the pursuit for which they had come to the lodge, that turned, first their minds, then their conversation, to a consideration of this morbid subject matter.

They had come to ski and now, frustrated by the vagaries of nature, their talk conformed with the circumstance and unfolded the gloom and depression they felt; the unspeakable was made vocal and drew them to probe the darkness of their souls and tell what each had witnessed, or heard, or supposed.

Stryker, more widely traveled than the others and, thus, with more to say, held the floor longer than the rest, recounting his experiences with the strange in Asia and Mexico; there was more he could have said if he’d wanted to retain the spotlight. But he didn’t. He wanted the “priest” to speak. He was intrigued by this old man who seemed so out of place in these surroundings. Who came to a ski lodge in a three-piece suit? The man was as pale as snow, white-haired and frail. Definitely not a skier. So what was he doing here?

Stryker recalled the old man had been garrulous at dinner the night before but he hadn’t really told them anything about himself. Not even his name.

The reporter sensed another story.

Each of the group had his turn until a period of silence prevailed and it appeared the stock of stories had been used up. Bored, or in search of a drink, their companions filed off until only Stryker and the “priest” were left.

Stryker rose from his armchair and sidled up to the old man. “How about you?”

“Hmph?” The man raised his head and his clear blue eyes bore straight into Stryker’s.

“I said, what about you? We didn’t hear a spook story from you.”

The old man raised a thin white hand and shook his head. “I’m sorry,” he said. “It’s been very interesting, but I have nothing to add.”

“Oh, everybody has a story,” Stryker coaxed.

Stryker remained hovering over the old man, his mind still riveted on the subject, though at any other time he might have been as game for a drink as the others.

Stryker slid onto the chair next to him, lit a cigarette and blew smoke. “So we’re alone now. Are you gonna indulge me or what?”

“I’d rather not,” the old man said, waving smoke away with one hand.

“It’s not good for anybody.”

Harry leaned toward him, holding the cigarette so the smoke curled up between them. “I’ll put it out if you’ll talk.”

The old man shook his head and smiled. “You wouldn’t believe me anyway.”

Angrily, Stryker turned on him. “How do you know? I didn’t challenge the others, did I?”

“No, you didn’t. But you didn’t believe them either.”

“So, maybe you’ll have a better story.”

The man gave him a thin smile, but said nothing. With a long white finger he flicked a speck of lint from his sleeve.

“You’re a reticent cuss, aren’t you? I don’t think you even told us your name last night.”

Rain drummed against the roof and ran in a steady stream off the eaves. Down the hall they heard the jukebox kick on in the bar. The music thumped in an unintelligible rhythmic vibration along the far wall.

The man smiled again, gazing at him wistfully. “I was much like you once,” he said.

“What? You were a reporter?”

Nick chuckled. “No. I meant ambitious, curious and brash.”

“It goes with the territory,” Stryker said with a shrug. “I wouldn’t be much of a journalist otherwise.” A hint of perfume from one of the women still hung in the room mingled with the stale scent of his cigarette but Stryker was surprised as he shifted closer to Nick the pithy medicinal dry flesh odor he associated with the elderly was missing. Instead he could have sworn he smelled the sharp tang of ozone.

“Of course you wouldn’t,” Nick was saying. “As I said, I was much the same. I was a lawyer. I didn’t believe a thing unless the facts were there to back it up.”

Stryker nodded. He snuffed his cigarette, sensing that the old man finally was leading up to a story and not wanting to annoy him by continuing to smoke.

“Facts are very important to you, too, aren’t they, Harry?”

“That’s why you listened politely to their stories, though you didn’t believe them. Even when you presented your own tales you went to great lengths to seek logical answers for what happened.”

“But sometimes there is no logical explanation.”

“No, there isn’t. I felt the same until I met a man who showed me there are no facts, only possibilities.”

“Ahah,” Stryker said, sitting up and slapping his thigh. “So there is a story.”

Nick’s eyes, dilated but with a queer yearning in them, turned on him. The old man sighed and folded his hands over his breast.

“Not much of one,” Nick said in a muted voice. “Just an experience. Since you insist, I’ll relate it.”

“Do you know the German term doppelganger?”

“Not exactly. More accurately, one who walks in our place.”

“They exist. They come out of nowhere and suck up your life like the rain melting the snow on the slopes. They take everything—family and friends, possessions, your very existence—leaving you with nothing.”

He said it so profoundly, Stryker could only grin.

“I guess you’re gonna tell me it happened to you.”

The music vibrated between them, an invisible curtain of sound.

Stryker laughed. “So now there are two of you?”

The old man scowled and Stryker struggled to presume a serious interest in the tale. “Go on,” he said. “Please.”

Nick gazed at him, steadily, but with something akin to compassion reflected in his pale eyes. “I know. You’re a skeptic. I was, too,” he said, calmly. “But that was before.

“Before he came to my office, I’d probably passed by him a dozen times or more on the street without giving him notice. But he had been observing me. He knew all about me.

“That day, when he came to my office, I assumed he was just another potential client. I didn’t fear him. In fact, I probably looked down on him. I was the great lawyer. He was nobody. Oh, if I had only known!”

Stryker leaned forward, intrigued by the old man’s sudden burst of passion. “Who was he?”

“Who he was is not important. Then he was nobody. Later, he became me.”

“I don’t understand. What are you talking about?”

Nick sneered, giving him a sidelong glance. “Understand? Of course you don’t understand. We never do, do we? Not until it’s too late.”

Suddenly, Stryker shuddered. He had a sense of regret for goading the old man to talk. The poor old guy was crazy and here he was encouraging his paranoia.

“You don’t understand, but you will,” Nick said.

Stryker shuddered again. He craved another cigarette, but even more he wanted to get away from this crazy old man.

Nick leaned down and untied his shoes. He pulled one off, rubbed his foot. “Do you mind?” he asked. “My feet are swollen.” Smiling, he stretched out his hand and laid it on Stryker’s knee. “You don’t know what it’s like to get old.”

Stryker jerked his leg away, repulsed.

As though he hadn’t noticed, the old man reclined in his seat, legs stretched out before him, hands laced together over his stomach. “It was all really my own fault,” he said in a voice barely audible. “I see that now. I took for granted what I had. I was vain and arrogant. I took advantage of those I considered beneath me. He knew all that. He came to make me better.”

Stryker squirmed in his seat.

Then Nick turned and looked at him again and he felt an icy chill as those blue eyes focused on him. He jerked convulsively. The old man laughed. It was more a raspy bark than a derisive crow.

Nick reached out and touched him once more with just the tips of his fingers.

Stryker bolted from his chair. “I’m sorry,” he sputtered, “I’ve just remembered something important I have to do.”

Stryker felt as though he had fallen into a pit of snakes. He felt queer, unclean. Hurrying down the hall to join the others, he wanted nothing so much as a drink. But as he came abreast of the restrooms, another need summoned. He wanted to cleanse himself, to wash away the old man’s touch.

The hot water seared his flesh and Stryker didn’t care. He scrubbed and scrubbed until he thought the skin would peel away. Then, satisfied at last, he shut off the tap and shook water from his hands. The music from the juke box throbbed behind him and, for a moment, the mirror was obscured by rising steam from the sink.

As the steam cleared and Stryker reached for a paper towel, he glanced into the mirror.

“No!” The word came without thought as he beheld the sight before him. Gazing into the glass he saw not his own face but that of the old man.
BIO:
John Lindermuth is a published author. See below for more info
Watch The Hour (April 2009), Whiskey Creek Press
Corruption's Child (June 2008), Whiskey Creek Press
http://www.jrlindermuth.com/
Posted by Author at 14:12