Harris has been very patient. We've been holding on to Confessions of a Jack-O-Lantern for ages - but all in a good cause. It's the story that inspired the concept of a TKnC Halloween special and so gave birth to this week's horror showcase - Hellicious Halloween.

This story turns the cards on the traditional pumpkinfest. So when you raise you knife later today to slice and gouge - listen to the voices... 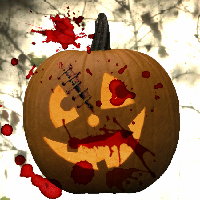 I started life like any garden variety pumpkin—a seed, a blossom, a bee on a flower. I soaked up the sun and sucked nourishment from the earth. I grew round and fat. One by one my siblings were removed until I had the vine to myself. I was fed a special diet and I grew enormous. I was a competition pumpkin destined for the blue ribbon at the county fair.


I don’t know what the boy who raised me used for plant food. It must have been some special mixture of his own invention. It had a strange result. Instead of making me grow in size, I grew aware. My plant fibers became more like nerves and, before the season was through, I could think and feel almost as well as you. I couldn’t speak or see but I could feel the sun on my skin and the rain washing over me. I could sense the days getting shorter and the nights cooler. Eventually frost nipped my vine and the growing season was over. I had grown large but I wasn’t in the same league as the real heavy weights. I must have weighed around eighty pounds. A good sized squash. The biggest pumpkin at the fair that year weighed in at 370 pounds. No blue ribbon for me.


Instead, I was taken to a place where hundreds of my kind were gathered. Bins filled with pumpkins were picked through by eager hands, admired for their shape and size, then sold for purposes unknown. Being as large as I was, I was kept in a special area. Lined up with the other big pumpkins, waiting for a customer to come along and purchase me. It took a few weeks but eventually I was rolled onto the back of a truck and taken to a suburban house a few miles away. There I was rolled across the front lawn and given a prominent place on the porch. I thought I would end my days watching the children play on the lawn and the traffic beyond. I was mistaken, fate had something else in store for me. Here’s where my story takes an unhappy turn.

I don’t suppose you’ve ever been carved. It’s not an experience I’d recommend. Being stabbed repeatedly is bad enough but carving large holes into one's body is especially cruel. Under the supervision of an adult, four demon children began the ordeal. First they cut a large opening in my head. I couldn’t begin to describe the pain that caused. Sawing deep into my flesh until the roof of my skull was pulled free of my body was pure agony. I was close to fainting but my ordeal had only begun. Despite my torture, happy laughing hands pulled on my stem, removed the top of my skull with a yank. It made a sucking sound. I screamed silent screams and passed out but did not die.

Then those same dirty little hands entered my body, diving up to their filthy elbows into my guts. They dug out handfuls of my insides until I was a hollow shell. It was like being pulled apart by jackals. The pain of that hollowing was beyond description. Think of how you’d feel if your lungs and liver were pulled out by demons and you’d have some idea of what I felt. If I could have screamed, I’d have screamed long and loud, but I couldn’t scream, I had no mouth. At least not yet.

Worse pain was yet to come. My tormentors were not quite through with me. A different knife was stabbed into my side repeatedly. In and out, in and out several times until two large triangular holes were sliced into me.The pieces were removed leaving me with crude approximations of eyes. The burning, searing pain of those cuts stay with me to this day. The cutting out of eye holes was so cruel and almost more than I could bear.

But the ordeal wasn’t over, more slashing ensued and another large piece of my flesh was brutally removed for a nose. A nose. What did I need with a nose? If I had any blood, I’d have bled rivers of it, gallons of it. But I couldn’t bleed. I couldn’t even move. I couldn’t beg them to stop. I had to stand there and take it. Oh the pain, the terrible pain. Did they have no pity? I could never do that to them.

By the time they finished sawing a huge jagged opening for a mouth, I was almost beyond caring. They sawed a crooked toothy rictus which gave my butchered face an evil grin. I looked almost as angry as I felt. My innocence was lost. Was this the reason I grew fat and round and wholesome? I could have fed dozens but instead I was turned into a caricature of a human face, an effigy of a head? For this I was tortured and killed? If I could bleed, if I could scream, if I could run away I might have saved myself but I could do none of those things. I was a dumb thing, a vegetable. I shouldn’t blame the children, but I do.

When I thought there was nothing further they could do to me, they found one more painful indignity for me to endure. The children placed a lighted candle inside my head. It burned, oh how it burned. It hurt with a steady smoldering pain that never let up. Think of a fire in your brain. Imagine your brain slowly cooking and you have some idea of how I spent my last few days. I’m sure I glowed splendid and frightening, but I cooked from the inside and I died.


My pain and suffering were at an end, but I could still think. As my spirit drifted away from the burnt, rotting thing I had become, it should have achieved peace. It should have returned to the earth like all vegetables to be re-cycled and reused. But that peace too was denied me. For while my body did indeed return to the soil, my spirit did not fade. My consciousness continued and it seethed with bitter resentment. I became an angry spirit seeking revenge. Revenge on those ignorant humans who abused me so. Especially on the children, I hated them all.

And so I wait for spring and another growing season. I hang over the pumpkin patch like a black cloud of anger and pain. Maybe I'll slip into a pumpkin seed and grow and fruit again. Maybe my fruits will again become the grinning face you call a jack-o-lantern. Maybe. Only this time I'll be ready. This time I'll bite back.