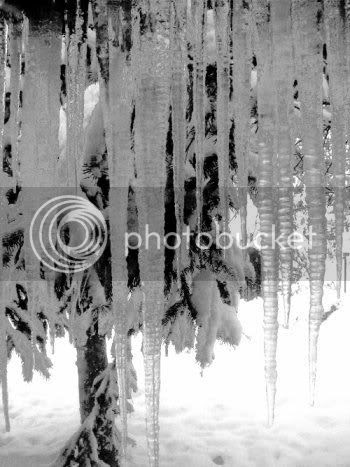 TKnC welcomes Dorothy back with a chilling tale of regret.

Snowflakes dance, don’t they, as they spiral down from the thick rich darkness of the clouds, pirouetting and sashaying and even tango-ing with the others as they fall. Blown here and there by the thermals, they create a magical image before sliding into the white death that is their fate, stacked one atop the other on any available surface, no matter how slender, there to rot until the time comes when they melt away, their final ending, returning to the matter from which they came.

The man rested his large forehead against the cold pane, staring out at the whiteness. He had heard you could go snowblind if you stared too long but what did he have to see if he lived, anyway? Nothing but the unheeding world, the bustling people who had no time for a man alone.

What was wrong with being alone? Why did everyone have to have a partner of some kind? ‘Not even a pet?’ Eyebrows were raised as the question was asked. Who needed a pet? Who needed the sycophantic love of a dog, the arrogant independence of a cat, the silent needs of a goldfish when there were –

Ah, when there were places to go and people to see beyond the imagination of those who questioned his living alone.

He turned from ever changing display of snow dancers and looked around his room. The piles of newspapers were threatening to topple; if they did, they would resemble a snow scene like the one outside, albeit one speckled with soot. Or ink. Or dirt. Living alone, he thought, meant he could do just that, stack up the newspapers, ignore the dirt and stand and look at the snowscape for hours if he wanted to without someone nagging him to clear this, eat that, take a walk, take a bath...

Did the newspapers rustle? Did the dust on the table lift and fall? Had she at last come in from the cold to be with him? He could see nothing, no hint of movement, no sense of another presence. How long did he have to wait before his love returned to him? Had she not promised, with her last breath, had she not said in that gentle way of hers, 'believe - I will be back.'

Was the problem that he did not believe strongly enough?

He looked for her every spring when the new grass thrust its way through the unremitting coldness of the earth chilled by the winter winds, in the summer amidst the brightness of the flowers and the bustling busyness of the animal world going about its ongoing need to ensure the survival of the species, in the autumn, waiting for someone to disturb the leaves that covered his lawns and still they lay, still in silent glory. How many years now? Five, ten, how long could he stay watching, waiting, whilst his mind narrowed to nothing more than the need to see her again? From time to time he would ask himself how long the money would hold out, then he would dismiss the thought. When it happened, someone would tell him, they would hammer on the door; say they had come to reclaim the place from him. Then they would look around and see the towering piles of papers and the dirt and the dust and they would put their hands over their noses because of the smell, the smell of things rotting.

Sometimes he thought he should remove the corpses, bury them beneath the lawn, but if he did that he would have to disturb the leaves which had fallen in such an artistic way, or he would have to disturb the fresh fallen snow and that would not do either, for had she not said, 'I love the way nature arranges itself.' Her wishes could not be undone.

He turned back to the window to see that the snow had stopped falling quite so heavily, the individual flakes could be seen, dancing for his eyes alone before becoming trapped in the white death.

One of the corpses was hers. In what moment of madness had he struck down, in what second of insanity had he snatched up the iron and crashed it into the side of her head? What had she said that had so enraged him? Long gone. Long, long gone. Did she forgive him in her dying moments? Did she say ‘believe – I will be back’ because she loved him or ‘believe – I will be back’ because she sought revenge? Sometimes he thought one thing, sometimes he thought the other. Either way he welcomed and feared her return.

And the other corpses? Those who had come looking for her.

He could not understand why no one had actually tracked down the fact that his home had been the last call for the people who came and never left. Perhaps it was because they were not 'authority' and perhaps because he had no neighbours. The only living beings who would have seen relatives come looking were the birds, the fox, maybe the badger who snuffled and slunk his way around the garden at night, half seen in the moonlight and ignored. Just as the visitors were ignored, until they became persistent and then they were added to the corpse room. With the door shut the smell was not too bad. After a while you didn’t even notice it any more.

The snow had stopped falling. Silent white world, nothing moving.

Nothing but the snow slowly lifting, lifting, lifting and transforming itself in a shape, a familiar shape, a once loved shape, one that was walking soft and cold over the packed snow and not leaving a single impression as it passed, and as it passed the cold blankness on the front of the head changed and moved and became the once loved face and then, for the first time, he was truly afraid.

He had no choice. It came closer and closer, it pointed to the front door. As if motivated by something he could not understand or resist, he negotiated the piles of papers, knocking some of them over into the ink stained snowscape he had imagined, and went to open the door.

She stood there, smiling, completely white and frozen.

He stepped out to meet her, against his will, against his entire logical mind. He had no choice. ‘Believe – I am back.’ Did she speak, did she project, did he form the words in his own mind? Before he could decide the door slammed against the side of the house and the snow, precariously perched on the slates, cascaded over him as she caught him in her snowy arms.

Together they went down into the white death.