IT'S CALLED TENDERIZING By Chad Rohrbacher 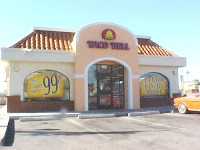 Here's another new voice. Please extend a hearty TKnC welcome to Chad with...

Al was in a foul mood when he walked in, but after the third “disabled person”, which in this place meant too fat for their own goddamned legs to carry ‘em, almost ran him over with their shitty motorized scooter, he was through.

He was there for flatbread, lettuce, refried beans and beer. He could feel the eyes of the other shoppers on him, the stereotypes buzzing to their tongues, and stopping there by pursed lips till he had moved out of earshot. They weren’t even that original most of the time and always seemed to be followed by statements like “taking our jobs” which was just damn hilarious as far as he was fucking concerned; a regular punch line that never stopped delivering the punches.

Al’s first job was working for at an apartment complex. The official title was Painter’s Helper, but he did about anything the boss asked including smiling at the wife when the boss and one of his girlfriends occupied an empty apartment for about 30 minutes. Al was sure the boss was so lazy he just pulled his pecker out of the damn zipper so no clothes had to be removed or wrinkled while also serving the purpose of clearly laying out to the woman that this was a simple “thank you mam” situation.

Picking up a head of lettuce, beginning to go brown, Al shook his head with disgust. It would have to do, he thought as he rubbed the sleep from his eyes. He craved his small dinner, his beer, his bed.

One of the first days at work, he was told he’d be picking up trash around the apartment including in front by Arlington Street, the major thoroughfare that butted up to the apartment’s main entrance. He figured money was money and if they were going to pay him to pick up trash, no sweat. Then he met the boss’s son who was ordered to help him. This was a cruel joke to teach the son responsibility or some shit. The boss told him, “Make that boy do his fair share, you hear?”

The kid was all leather and tattoos, nose weighted down by silver, black eyeliner and blue jeans. A real dumbass.

The kid suggested they separate so they could get the complex done faster. “I’ll take the back,” the kid said shoving a thumb toward the pool. Al nodded. What else was he supposed to do?

After about an hour and close to three disparaging catcalls from passing cars including one that included tequila and a part of the body he had never heard of before, Al headed back to the office. On the way he just happened to look in one of the empty apartment’s windows and saw the kid inside. Al rapped the door and the kid jumped.

Inside, the kid ran his hands through his hair, eyes darted one way then the next. Al’s garbage bag bulged with plastic bottles, aluminum cans, papers, rotting food. The kid’s bag was near empty. “I,” he stuttered, “you know, dude, I just can’t. I can’t pick up garbage.”

Rounding the aisle, Al sighed relief. Not one damn person here buying their Wonder bread gawk and nod and smirk to their fat spouse’s about what how the fucking Latinos can’t even eat American food here in America. He grabbed his flatbread and threw it in the basket.

The more he thought of that kid, it really burned him up. The kid whined, “Dude, it’s so disintegrating.” Al grabbed the kid’s bag, poured half of his garbage in it and left the apartment before the boss came around. He didn’t have the luxury of feeling ‘disintegrated’. Stupid kid didn’t even know his own fucking language.

When Al got to aisle with the beans, the weight of the day really hit him. He unconsciously felt his face, the dried paint specks he got while rolling the ceiling, and then he yawned. He daydreamed of a shower and a beer, maybe even a beer in the shower, and that’s when he saw an inflated man with calves the size of his biceps on a scooter coming at him with a teenage boy in tow. The guy had wiry stubble jutting from his chin and sideburns reaching down over his jowls. His faded American flag hat fit too snugly over his broad forehead making a roll of flesh poke under like a small wave. Al picked up his pace to the beans ready to just grab and get.

The teenager was chubby too, man boobs poking out his white undershirt, hair cut short, slits for eyes, drank a Coke as he walked alongside the scooter. Al noticed the nod and smirk the kid gave his father, but the father did not reciprocate while Al watched. They never did while he watched.

Al didn’t realize the refried beans were on the bottom shelf, so he had to kneel down to find what he needed. He could hear the electric engine hum closer. Al plucked a can of beans, Taco Bell, and stared at the picture: dog food. Fuck it, he thought; he was damned tired. Out of the corner of his eye, Al noticed the scooter parked by his thigh.

“You need some help reading’ that?”

“I need by. My chili beans are up there and yer in my way.”

The fat man inched up his scooter. The teen laughed and Al could hear the fat man chuckle too.

“You comprehende? I need by.”

Al looked around. There was no one in the aisle and the fat man seemingly read his mind, “I can’t turn this thing to get around you so you hafta move.”

Al squeezed the can in his right hand. He could feel the blood pulsing in his neck, his temple.

The fat man inched up again and bumped into Al’s knee. Al popped up squaring off to both of them, then turned aside. His mouth was dry, tongue swollen, and his fingers dug into the can. The teen and fat man eyed one another and smiled. Screw ‘em. Al just wanted to get his beer and get home.

Leaning down to the fat man’s ear, the teen said, “I’m tired of them people. I bet he don’t even have a green card.”

It was a wild swing that caught the teen under the eye and Al was just as surprised as the teenager. The cheekbone exploded, the bean can making a semi-circle slash so deep, so significant it sprayed blood a foot away. The only sound the teen was able to make was with his face bone cracking into shards.

The fat man moaned. He pressed the handle on the scooter and his voice squealed; his head twisted back trying to catch a glimpse of Al.

Al was strangely calm, stalking, tapping his thigh with the can. Marching forward, Al caught up to the scooter and the fat man yowled while trying to weave from one side to the next. Pasta sauce, Rice-A-Roni. When the can was brought down on the fat man’s head, the scooter came to a dead stop. The fat man’s head lolled. Al brought the can down again, again, and blood poured out from under the fat man’s hat, ran down his face and back while bone was rammed into his gray matter.

Al dropped the bloody Taco Bell can on the linoleum and looked around. People gawked. People covered their mouths with their hands. People ran away.

Al made his way to the beer aisle with only one thing on his mind: he hoped he would get at least one Budweiser before the cops showed up and hauled his ass away.

BIO:
Chad Rohrbacher has had stories published at Powder Burn Flash, The Flash Fiction Offensive, and Pulp Engine. He blogs here:
http://rohrbacher.wordpress.com/
Posted by Author at 12:12