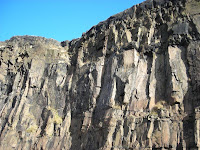 This is the fourth in the on-going series following the anonymous Wile. E. Coyote killer and his hopeless attempts at murdering his nemesis, Robert. For previous episodes, put PIE in the search blog bar.

I’m not really the physical type, so the idea of a weekend spent building rafts and scaling gorges while wet through and thoroughly miserable isn’t my idea of a good time. Add the discomfort of sleeping in a tent pitched on rocky ground to the fact that I had to share the damn thing with the red-headed lothario, Robert, and you’ll get a good idea of how peed off I was.

Bad enough that Robert is a gobshite who loves the sound of his own bragging, and he stinks like a donkey’s armpit after a couple pints of stout, but the git was also responsible for knocking off my wife, Roxy, for months.

I put a stop to that.

I skulled Roxy and drove her and her car in front of a train.

Since then it’s been a mission of mine to send Robert to a similarly gruesome fate.

The problem is, three times now I’ve failed to kill the self-proclaimed God’s gift to womankind.
My only saving grace was that Robert had pulled with Becki – a temp who thought she’d extend her contract if she sucked up to one of the bosses. So I had the tent to myself for most of Friday and Saturday night. Free from Robert’s farts and the homicidal thoughts I had every time he lifted his leg and let rattle. (I wondered what the police would find most unusual: the tent peg rammed through his skull, or the carabiners clamping his butt cheeks together?)

Sunday night was going to be different though. Becki had a christening to attend, and it was unlikely she’d come back to our moorland base for the final night. Unless Robert found another pie to dabble his fingers in, I was going to have to spend about the worst night imaginable. The only other female with us was Big Jan, and I doubted that Robert’s charms would win her over. Not when her partner Fifi was waiting for her at home. Robert wasn’t one for crew cuts, baggy football tops and jeans strung with chains, but he’d even bragged once that – if he so desired – he could turn even Jan.

I thought about telling Jan his plan. Let her snap his neck for me.

But I hadn’t. I didn’t want Jan to get in trouble for killing the son of a bitch.

No, Robert was my problem to deal with. I owed him big time.

We were out on the moor, orienteering.

While Jan and Craig, and Billy and James, went off following a map and compass, hunting for the coordinates our ‘team leaders’ had marked out, me and Robert went the other.

To hell with that for a lark, Robert announced after about two minutes. I’m off down the village for a pint.

We’re not going to pass the course if we go AWOL, I told him.

Like I care? There’s a hot bit of crumpet serving behind the bar. Gonna try my luck. Are you coming or not?

I looked fondly at the desolate hillside that led all the way down to Bilgefoot. It was sufficiently craggy, full of loose rocks with sudden drop offs. It would be a great shame if poor Robert just happened to slip, fall of the cliff and splatter on the rocks below. No way could I allow him to attempt the treacherous path alone.

Of course I’m coming. Wouldn’t miss it for the world.

See, Robert said as he smoothed down his copper wire hair, I told the others that you had hidden depths. For such a wimp you've a real sense of adventure.

Robert shoved me in the shoulder. Good pals us.

I get the bird, you get the collie dog, he laughed. That’s the only other hot bitch in Bilgefoot.

We set off, rucksacks lightened by dumping all the unnecessary gear.

We’d come so far in Land Rovers, hiked in the remainder. Bilgefoot was a good three miles off and it was a long time since either of us had walked that far on level ground, let alone over hills.
We’d barely made it a mile when the rain came down in torrents. The rocks underfoot grew very slick, but Robert went over them like he was born to the mountains. I huffed and puffed to keep up, swearing I was going to take up my gym membership again.

Cold pint, hot fire, even hotter barmaid, Robert cajoled me along. And if you’re up for it, you can stroke the hot dog. Bet you’re good at that seeing as you’ve abstained from women since Roxy died.

We were on a narrow path over a hundred foot drop off.

What a tragedy if Robert slipped now. There would be nothing I could do for him. He’d fall all the way down, and if he didn’t smash himself to pieces on the rocks, the exposure would kill him while I spent the afternoon in the bar. Stroking the dog.

I was just about to shove him in the small of his back. Send him into space.

But the guardian angel that looks after Robert was working overtime. How it managed to jam that slick stone under my own boot had to be divine intervention.

My arms wind-milled, grabbing at air but found nothing. Off the cliff I went, with a tuck and a roll, then I was doing a swan dive through the sky.

As I flipped Robert grabbed me by my jacket collar. I dangled there with my heels over space, but then Robert yanked me up and set me back on the trail.

Excitement getting to you, me old mate?

Aah, it was nothing. You’d do the same for me.

God damn it if I didn’t have to eat humble pie.