Absolutely*Kate tells me she is a TKnC virgin. I find this impossibly hard to believe having read her work and listened to her incredible words - and believe me - you really do have to listen.

Kate's Hellicious Halloween story MNF is yet another unusual theme for the showcase, as I'm sure readers will agree. Please welcome her in, and open your ears as well as your eyes - for this is the unique voice of Absolutely*Kate... 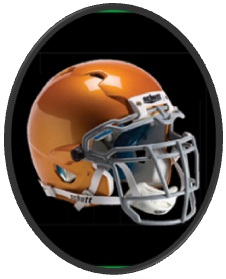 Monday night's mood was intense in the press box. The Zagwars wanted to impose their wills on the Bravens defense. Brutally so. Blood and gore and more so. But some force was blockin' customary urge o'rage. I saw it. I felt the opposite energy. I was there in the sticky heat of Florida's juiciest Stadium with 67,483 fans who I sensed drank it in too. I tell you it was more than the ol' calendar turning edges to edginess, ending October midst week#8, the Halloween NFL scene. Somethin' just out of reach was spooking everyone. Oxymoronically, I felt it. Jim Flynn, next to me in the sound booth, dazzling his Blackberry with a frenetic performance like he was inches to goal in OT, was cussin' on 'bout heebie jeebies o'bad vibes all night. My bud Hank Jenkins down the line? Hell, he shot me the What the Fuck more 'n five times in the second-quarter. It's the look you see when you never saw somethin' comin' that you still see. That's about how it shook down that night. Well, how it shook me up that night, is more like it.

Night started like any Monday Night Football game starts. Home team arrives. National media coverage and camera crews set up. Vendors vend full force, shooting silver bullet Coors into the stands - the stadium gets jazzed. There's more than just good natured gridiron goin' on when the Zagwars' testosterone puffs and struts prime time. Decibels raise. Cheerleaders' cleavage dips far beneath any semblance of the Mason-Dixon line. (I dated both Jenny Mason and Dottie Dixon once or twice and they made an art form of that line.)

How I crossed that line though isn't tonight's glory story. Actually, that one would be a helluva lot easier to spiel my guts on as I knew what I went in for and what the score was, but this one - damn, this one's tough to figure, hard-pressed to report on.

You see, though thousands of screaming visitor fans were lined up when the Bravens stomped en masse through spiky wrought-iron gates to the stadium locker room, the excitement subdued. Players came in with heads huddled low, 'neath voluminous silvery black jersey hoods. No eye contact. Most sporting earbuds or headphones plugging them into zones a world away from their current fan base. Zombie like. Opposite energies.

When the game got goin' there was plenty of action on the playing field, yet negative yardage. Opposite energies again. Go figger. Not so much defensive/impressive as some mighty intangibles we were all jawin' eerie about upstairs. Me? I'm Jimbo Ray Jordan, vital voice of WFLO and I still can't rightly speak about what happened that night.

From the befuddled Zagwar's rookie quarterback to any penny-ante sports hack, word spread from the 50-yardline on, there were 13 men on the field - at numerous occasions. When refs' yellow flags eradicated monster moshpits of mass destruction tinted Zag-orange and silvery-black, the count showed a solid eleven. No penalty, no first-downs. Opposite energies.

It was the radio in my primo teal metal-flake Camauro, that better acquainted me with haunting truths. Peelin' outta the parkin' garage just about midnight, blowing a g'bye kiss to sweet little Millie's tollbooth, I got the signal coming in on local AM Sports Jive. Wanted to glean how juggernauts and knuckleheads butted heads post-game. Instead - still a pickle of a puzzle why nothin' made it over the wireservices or net when we were in Ogroveco Stadium, but the sad skinny that came down was . . . well, I really hate to have to tell you foks, but it was the Bravens' team plane. Yep. Came down in a ravine. Crashed down and crushed up like the end of a Crest toothpaste tube no one wanted to take a turn with anymore. Playbooks, coaches, tight ends, free safeties, reinforced helmets, dangling heads, firm shoulderpads, squashed shoulderblades, jostled jock straps and what squished in 'em were strewn over and under like bad odds in Vegas through matted, tangled, crimson underbrush. No pride there for them boys who'd been signed this season from Alabama. No pride, no prowess, no life for the boys signed on from any Big 10 or Eastern Conference leagues . . . no more, no how, no way I'm sorrowed to say. Every darn vestige of a divisional championship team flying high, now - grounded, lifeless, tragically cut from prime glories, lifelong stories. Report dubbed it a freakish accident. They had good weather comin' off the Coast - then a gaggle of geese, ironically in a classic red zone scoring V-formation, had entered airspace on a downwind. Feathered impressions clogged visions and all attempts to regain control from the tumultuous downward spiral. Opposite energies, I tell you.


ETA and proclaimed TOD by first EMTs on the NFL horrific crash scene were simultaneously three hours before gametime. The game? Oh yeah, the game ended in ignominious slaughter.

Some say the Zagwars never had a ghost of a chance.

Word on the astroturf was the debacle in N'awleans, NFL week #6, made some psychobabble fans more than usual sick. There was bad voodoo that they do comin' down, spinnin' round. I don't mess wit' dat stuff. Opposite energies of good football and bad magic aren't reality TV. This is prime time baby.


HOLY COLLABORATIONS! { in the dazzling works }

Cowboy-surfer HARRY B SANDERFORD and Absolutely*Kate knuckle 1-2 punches in ~ SWEET CHILI PHILLY. Get ringside baby ~ it's a November knockout.