What is it about so many horror writers that they are nicest people you could ever wish to meet? Phil Ambler fits that bill, yet the weekly drabbles he posts to The Feardom's Prediction Challenge and elsewhere are chilling in the extreme. Indeed he recently won the challenge with Host - one of the darkest pieces I have read in a long while.

Phil brings fear and romance to Hellicious Halloween with his tale Halloween Lovers. This is his second outing on TKnC - and we're glad he's back. 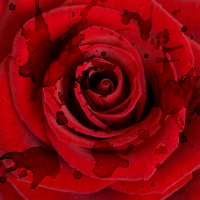 We both stood there in the kitchen, staring silently at each other as the candles flickered around us. Her face was as beautiful as I remembered it, pale as a porcelain doll with those big, doe like eyes of hers so full of longing and sorrow. She wore the same gingham dress which she had worn on our first date in October 2007, a black jumper draped over her alabaster shoulders.

She had smiled coyly at me that evening when I had told her how pretty she was as we walked in the silvery moonlight. I had joked that I would see her safely back home, past all the hellacious Halloween monsters wanting to drag her back to their foul and fetid pits. We both knew that I would end up in her bed that night but it was nice to have the excuse to hide behind.

It was a year later to the day that I proposed to her. Logs crackled in the open hearth and the living room was adorned with candles casting shadows across its length. I had sat on the sofa, a bundle of nerves, rehearsing those specially chosen words as I waited for her to get home. She had walked through the door dressed in a sexy little witches outfit, all black lace and fishnet tights. She took one look at me sitting there with that little red box in my hand and fell upon me, her sweet, full lips plastering my face with cheap black lipstick. I never even got to ask her the question.

We married the following year on 31 October, when else, in a castle in Scotland. It was perfect. It had been a beautiful autumnal day, the trees laden with golden leaves as the sun painted an umber sky which shimmered in the crystal clear waters of the loch. Some people said we were condemning ourselves to a lifetime of misery marrying on Halloween but we didn't care, it was superstitious nonsense to us; we had each other and nothing else mattered.

I wonder what might have happened if we'd married a day later.

Things changed between us. Little things which we'd laughed at beforehand grated on the pair of us. We started arguing over stupid things, who did the washing up, whose turn it was to cook, how much I was drinking. I started working late, going out to the pub with my friends or just on my own, anything to avoid going home to her. And then one day I hit her.

She left me on our anniversary. One day she was there and then the next she was gone. People sympathised with me, offered me their support, but they didn't know the truth of the matter and I wasn't about to tell them.

I spent a year trying to get her back. At first I didn't know how I was going to do it. All I knew was that it was all down to me and there was no-one else to blame. I went to specialists who helped me to understand that and what I had to do to get her back. I spent hours pouring over books until I knew the exact words that I would use to be able to see her again.

So here we were now; just the two of us staring at each other in what had been our kitchen waiting for one of us to break the silence. It was appropriate that it was on Halloween, our anniversary; it would not have been possible on any other day. There was no other day of the year I could have persuaded her to come back over to me. We had lots to talk about. We had to talk about what happened. I had to tell her how much I missed her. I had to tell her that a day didn't go by that I didn't think about her. Most importantly I had to apologise. I hadn't meant to hurt her. It had been the drink. I had to tell her how sorry I was. She had waited up for me the evening that she left me. When I got in she had thrown our anniversary meal at me, turned to charcoal from sitting in the oven whilst I was out drinking. If she had just gone to bed things would have been different but I couldn't stop myself. I hadn’t meant to make her leave me. If she hadn't shouted at me she would still be here. If she hadn't hit me I wouldn't have killed her.

And so we stood there staring at each other.

BIO: Phil Ambler is a writer from the South East of England who prefers to write on the darker side of life. Phil's short story Well has been published on Thrillers, Killers 'n' Chillers and he currently has several finished shorts he is trying to find a home for. Follow Phil on Twitter @phlambler.