It's our pleasure to welcome S. K. Adams to TK'n' C with his wicked début horror tale. 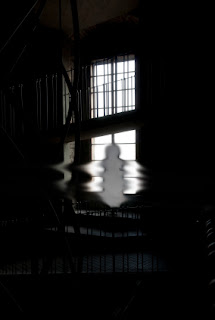 Gary McKinley lay upon the bed in a foetal position. Sleep was beyond him, he longed for that empty dreamless void to claim him; yet consciousness remained his jailor, dangling him over a chasm of jagged memories, ever the puppet master and torturer of troubled minds. There was no hope of escape from the night that stretched endlessly before him.

Squeaking treads of heavy soled footwear approached along the corridor beyond Gary’s room; a momentary respite from the crushing loneliness gnawing at his soul. Through the lighted crack beneath the door of his room, he saw movement. The feet came to a stop outside. He closed his eyes, heard the flick of a switch. Red tinged light filtered through his eyelids. The switch flicked again. Darkness returned and the footsteps moved on.

Gary sighed, rolling over onto his back, rubber sheets creaking beneath him. Every fifteen minutes they checked on him. Suicide watch; it baffled him why they bothered. He could be dead in less than a minute if he put his mind to it.  He was not afraid to die, not really, but he didn’t believe anything came afterwards - and that did frighten him. He tried to fix his thoughts on something comforting. There was only Bella.

Most days he was happy to wake up next to her. He missed her so very much. She was the only girl for him. With his eyes shut, he could almost sense her there beside him. He could touch her warm soft skin, feel her moonbeam breath, her long flowing limbs entwined with his; the familiar morning after funk of intimacy. Gary’s breath began to slow. Between the sheets, he felt the first stirrings of passion. Rising, focusing the blood, focusing the moon?

The moon. Gary’s eyes snapped open, his arms and legs spread wide like a new-born baby afraid of falling.

“Oh Christ, not now, not here,” he said through gritted teeth.

In here, in the loony bin, the mad house, in Hill Crest Asylum the lines were definitely blurring. The full moon was rising, and Gary felt its pull as he had all the other times - but this time he wouldn’t be able to outrun it. In this place, it would overtake him for sure.

An ache in his bladder needed remedying. The tiled floor was cold under Gary’s feet as he padded over to the ensuite bathroom. You couldn’t clean the stains out of carpet, he mused. At least the tiles weren’t red. He remembered a painting of Nelson’s flagship, the decks painted red to disguise the blood. He had spent time in police cells where they still practiced that form of camouflage. Images of blood filled Gary’s head. He could smell it now; it was everywhere, like hot rusty metal.

Gary flicked on the light in the bathroom; an extractor fan in the ceiling began to hum. He tottered over to the toilet, lowered the lid, pulled down his boxer shorts and sat; wincing as a fiery pain flared in his guts. He forced his still swollen penis down into the bowl. At least he wouldn’t fall so far should he pass out, he thought as he gingerly allowed his bladder to let go. When it came, the flow felt like razor blades dipped in dry ice forcing their way out of him.

The effort of passing water made Gary nauseous, his skin clammy. He tried to focus on his surroundings. No windows, just a shower, hand basin and the toilet he sat on. All stark and depressingly sterile. On the grey walls, a notice warning of the penalties for drug taking, a large red panic button and over the basin, a mirror. He got to his feet. Out of habit he glanced down at the bowl. The water was crimson. Somewhere outside in the night the full moon had risen.

Gary staggered to the basin and turned on the cold tap; he cupped water in his hands and splashed it onto his face. He rested his hands upon the basin and tried to control his breathing. Slowly he looked up into the mirror. The face that glared back at him was not his own. It was the face of the moon, twisted and leering down at Gary from an apocalyptic sky.

“Peek-a-boo, I see you,” said the moon. “You look like shit. Why are you hiding in that little room, Gary?”

Gary watched in horror as the face of the moon expanded to fill the mirror until just one terrible eye peered in at him, as if he were a specimen in a jar.

“You killed her Gary.”

Gary’s hands turned white as his grip on the basin tightened.

“No, you’re a liar. Bella is waiting for me, and she’ll be there when they let me go home. Please... go away; I just want to be alone.”

The moon’s mouth cracked open, flakes that could have been the size of mountains sheared off and fell to earth as a quake of laughter shook the bathroom. Gary flinched from the sound as cracks appeared in the walls and plaster dust dropped from the ceiling.

"Bella isn't at home, Gary. You killed her because I told you to."

“Fuck off! You don’t exist,” Gary screamed at the top of his voice.

Gary felt a sudden sharp pain in his chest, like a bony finger inserting itself under his ribcage, twisting and poking his gall bladder… forcing its way into his lung and dragging a jagged fingernail over the muscle of his heart. He cried aloud begging for the pain to stop. Like a man impaled upon a spike he felt helpless against such excruciating agony. Gary collapsed to the bathroom floor, curling into a tight ball. Then, just as suddenly as it had started, the pain stopped and the reflux began.

Gary crawled across the floor and peered into the toilet bowl as acid rose into his throat, stringy lengths of saliva dripped from his open mouth as his stomach began to spasm. He belched louder than he could ever remember doing in his life. The smell reminded him of a dead cat he had once found in a hedge when he was a child -  road kill, left to rot in the summer sun for at least a week. He remembered the maggots crawling inside the cat's rib cage and the fat lazy bluebottles buzzing. But mostly it was the smell of decomposing flesh that made him want to heave his guts. Something rose up inside him forcing a heavy lump into his throat. White spots danced in his eyes, he could not catch his breath.
With one final agonising spasm, Gary’s mouth yawned open, giving birth to something small and furry that plopped into the toilet bowl and floated there, slowly rolling in the bloody water.

“Do you recognise him, Gary?” asked the moon. “Your little Siamese gerbil, Firkin. You killed him for me when you were ten years old, skewered him with your mother’s knitting needles remember? I was very impressed; I keep all your gifts to me, Gary. Bella is here too; would you like me to send you a reminder? An ear maybe or an eyeball, she has lovely brown eyes doesn’t she, Gary.”

Ever so slowly, Gary pulled himself up from the floor, adrenalin flooded through every fibre of his body. It was not a red mist that descended, but an avalanche. He slipped his fingers under the porcelain lid of the toilet cistern and picked it up.

“I won’t be your fucking puppet anymore,” he screamed at the moon. He raised the heavy lid above his head and brought it crashing down onto the surface of the mirror. To his disgust the mirror did not shatter, a safety feature of your modern day Asylum, but it did fragment, giving the illusion of a hundred evil moon faces seen through the eyes of a fly.

The mirror may not have shattered but the porcelain lid had, sending shards flying in all directions. A dull ache drew Gary’s attention to where a jagged white splinter protruded from his thigh.

“Oh that looks nasty buddy, better call for help or you’re a dead man,” said the myriad faces of his tormenter.

Gary slipped a trembling hand around the shard and pulled it out. It tore through the femoral artery. Blood spurted in a high arc as he staggered backwards, splashing the grey walls. His eyes focused on the panic button but it was too late, already he was falling into darkness.

It took three men to force open the bathroom door. Gary’s body had fallen against it. Suicide was a messy business and involved plenty of paperwork. The attending doctor was new to the job. The claustrophobic bathroom newly painted in Gary’s lifeblood made him feel a little queasy. He had to sit down on the toilet and take a few breaths before he could continue the examination. When he stood, he absentmindedly flushed the remains of Firkin the Siamese gerbil away without anybody ever knowing it had been there.

S.K. Adams is a forty something fledgling author writing short stories and poetry. So far he has had two short stories published. [Until today! Ed] He prefers to write about the darker side of life. Most of what he writes comes under the heading of Speculative Fiction. More often than not there is a vein of dark humor running through his stories.
Posted by Lily Childs at 22:25