Another tale that tickled our festival fancy a while back was this mafia-style treat from Keith Gingell. Keith allowed us to hang on to Toby's Last Halloween Party for the Hellicious Halloween showcase and we're so glad he did.

A very different celebration, and a party to die for... 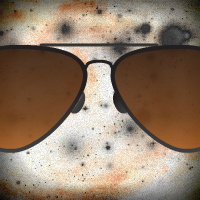 The Mercedes limousine coasted to a halt at the entrance of the largest privately owned Georgian mansion in Virginia. Its flawless panther-black coachwork reflected the flickering light of five hundred Halloween lanterns lining the path to the great house. The last of the guests, Don Castelvetrano and his family, had arrived.

Toby De Havilland, dressed in a white tuxedo, hurried toward the car. He spread his arms wide to greet its emerging occupants. One by one he kissed the cheeks of his guest’s daughter, two sons and bejewelled wife. To each he whispered, “Bouena sera.”  He approached the Don, hugged him briefly then stepped back.

The Don nodded; his fleeting glance at the house sufficient to indicate his impatience to get his family out of the chilly fall air.

Toby noticed the glance in an instant. “Penso che dovremmo andare all'interno.” Snapping his fingers in the direction of his waiting guards, he motioned them to escort his ‘honoured’ guest into the house.

After checking the Don was suitably impressed by his surroundings, Toby stepped up to the limo and tapped on the passenger window. The glass slid down without a sound.

“Make sure those fucking assholes never make it back to Palermo.” He dropped a bulging brown envelope on the seat beside the chauffer. “You’ll get the rest when the job’s done.”

Toby De Havilland ran his life this way. He’d done this as long as he could remember. In his early days he did the jobs himself, and enjoyed the work. He’d carved his way to the top: literally. Eliminating troublesome competitors using any means available – an art in Toby’s hands. Now he ran a legitimate business empire, but he still kept in touch with those who provided the funds. They loved him because he was meticulous. He was clean and therefore useful. They used him. He used them. It would stay that way all the while Toby De Havilland was beyond suspicion.

Inside the house, surrounded by the opulence of original Georgian colours and antique furnishings, Don Caselvetrano, along with all the other glittering guests, enjoyed attentive service. Attractive waiters and waitresses ghosted around, offering glasses of various wines and exquisite canapés from antique silver platters. The De Havilland Halloween parties, one of the highlights of the social calendar, were always well attended. Everybody wanted to go, but nobody dared ask how their host made so much money.

The spacious reception hall hummed with party conversation, most of it about what surprise Toby had planned this time. Every year he came up with a new distraction, each one more extravagant than before. The room hushed when Toby entered the reception hall with a beautiful girl dressed as a witch on each arm. The crowd parted as they made their way to the large, exquisitely carved, dividing doors at the end of the room.

The girls broke away and took their places behind Toby. He faced his guests and addressed them in a clear voice, “Ladies and gentlemen, boys and girls … witches and vampires,” he waited for the ripple of polite laughter to pass. “Tonight we are going to return to our childhood. We are going to partake in the ancient tradition of bobbing for apples.”

The crowd murmured, some with excitement, some with confusion. Toby held up his hands and waited for silence. “But, my friends, this is no ordinary country apple dip.”

He gestured to the girls to push the great doors apart. Behind them stood a long table covered in fine white linen. Five large silver punch-bowls sat side-by-side in the centre of the spread. At each end of the table, twelve unopened bottles of Champagne. Five small baskets filled with pink and cream striped apples lay on the floor in a carefully arranged display.

Toby stepped to one side, allowing his guests a clear view.

“Tonight, my dear guests, you will be bobbing for Bardsey apples; the rarest apples in the world, floating on a sparkling bed of Perrier-Jouët; the most exclusive Champagne in production.”

The girls got to work: one expertly popped off the corks, while the other filled the punch-bowls. A young man dressed as a vampire tipped the contents of a basket into each bowl. The carefully choreographed operation took less than three minutes.

Toby stepped forward while the servants spirited the empty bottles and baskets away. With a flurry like a conjuror, he pulled a pure white lobster bib from his pocket and tied it around his neck.

“My dear guests. As your host, I claim the right to be the first to snap an apple.”

He turned around and placed his hands behind his back. A waitress appeared with a white ribbon and tied it around his wrists. He approached the centre bowl and bent over it, while the crowd applauded.

As he lowered his face into the punch-bowl, Toby smelled the sweet aroma of apple mingled with fermented grapes, and felt the cooling effect of thousands of miniscule Champagne droplets caressing his skin. His heartbeat increased. This was the only unrehearsed part of the show, but his ego told him it would be easy. Closing his eyes against the stinging droplets, he opened his mouth and attempted to catch an apple. It slipped from his grasp and bobbed away.

He realised, although he’d arranged for the apples to be small and for the liquid to be shallow, it wasn’t going to be simple. Taking a deep breath, he wrapped his lips around an apple and pushed it under the Champagne until it was trapped against the bottom of the bowl. He sunk his teeth deep into its fragrant flesh. Triumphant, he tried to raise his head out of the liquid, but the apple stuck on the bottom, it seemed to weigh a hundred pounds. Champagne flooded into his nose. Instinctively he tried to spit the apple out, but it stayed put. The more he opened his mouth, the deeper inside it seemed to go.

He became aware of a hand caressing the back of his head gently, but firmly holding him down. Champagne gushed into his mouth through his nose stinging his throat. He started to feel dizzy. A voice came to him. The sweet voice of a little girl, “Toby … Toby. It’s Sara, your sweetheart. Don’t you remember me? Let me sing our song, my sweet love.” She sang to a childish tune:

“Toby, Toby. My sweet love.
You were sent to me from Heaven above.
You’ll be my man, I’ll be your wife.
Together we’ll be, for all our life.

Toby, Toby, I love you so much.
I long to grow up and feel your touch.
The bond we have, no one can sever.
We’ll be lovers for ever and ever.”

As she sang, the misty image of a beautiful child appeared before Toby. Recollection came to him. Sara. That soppy girl who followed me everywhere when I was seven. He remembered the Halloween party at his parent’s farm forty years before. The apple bobbing had finished, and all the other kids were in the house eating pumpkin pie. Toby hated it, and escaped outside to the darkening farmyard. Sara followed him, singing her stupid song. He regarded her with disgust. Together forever? No Way!

He spotted the big tub. “Let’s bob for apples,” he suggested. “Just us two.”

Toby remembered watching her dip her milk-white skin into the tub, and how he pushed her head down, holding her under until she stopped moving. He tipped her body completely into the deep tub to make it look like she’d fallen in. He recalled how he ran into the house screaming: shamming terror. I found Sara in the tub! She must have fallen in. She’s not moving. I’m scared Mamma. She’s not dead is she?

Toby tried to struggle free of the ribbon around his wrists, but as he tugged it tightened. Someone was pulling it taut. Sara spoke to him, her voice distorted and echoing, “I’ve come for you my love. I’ve waited a long time for this moment, but at last you are mine. I’ve grown into a woman, but I’m still a virgin, saving myself for you. Look at me Toby!”

He recoiled from the apparition forcing its way into his mind. He saw the beautiful head of Sara attached to an old woman’s naked body. Her large breasts, flat and flaccid, hung almost down to her stomach. The skin of her bony body blackening with decay. The cloying stench of rotting flesh raped his senses.

Sara thrust forward and pulled him to her with strong arms.

“Make love to me Toby. You are mine forever.”

Toby screamed, as he felt his spirit snap free from his body. The spirit couple drifted high above the mansion into a dark void; Toby locked in Sara’s embrace struggling wildly, his face contorted with terror.

The guests watched their host and chuckled as he dipped his head into the champagne. Their jovial mood changed to concern when, after five seconds, they saw his body stiffen and convulse. He jerked back and crumpled on the ground, sending the punch-bowl and its $12,000 contents clattering to the floor.

During the confusion that followed, Don Castelvetrano sidled up to his eldest son. He covered his mouth with his hand.

“Are you sure the nerve gas in that snake’s champagne bowl is untraceable?”

“Your girl did a good job. Make sure she gets the money De Haviland gave the chauffeur after you garrotte him.”

The Don turned to leave, but hesitated. “The girl. What is her name?”

BIO: I have been writing fiction for about five years, firstly as a hobby, but now I am getting serious about it. I have stories published in Volumes 3 and 4 of Radgepacket and one in the newly released Volume 5. I also have a couple of stories on the Radgepacket website.