THE ALLEY By Robert John Miller 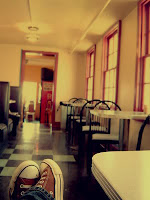 
After midnight and I'm in the Mexican fast food drive-thru ordering coffee, black, with a packet of salt. The drive-thru because years ago all the 24-hour diners shut down for the night, the salt to take the bitterness out of the day-old brew they're serving reheated. What bitterness the salt can't take out, the whiskey kills.

Earlier tonight I dropped by the office, found my partner hanging by his own belt. I would've joined him, but I couldn't find his note. He didn't leave one, so I knew he didn't do it. Executed, pretty-like, so no police investigation. We had discussed a lot of details over the years, and now the last words he didn't leave told me that this was no suicide, that his dying solace would be thoughts of me taking revenge.

It could've been anybody, but I knew who it was, maybe because I’m that good and maybe because she was that sloppy. People get lazy when they think they'll never get noticed, and that's one of their more endearing qualities. This one, she left her scent on his collar, and I was trailing it. I'm a bloodhound, and the bitch smelled like strawberries.

She worked at my next stop, Needle's, as a dancer. I was showing my face, signaling her friends that I knew. I didn't think she'd be in, but there she was. Dancing, like any other night. I guess a killer still has to eat. Or at least, I do. And her body was making me hungry.

She leveraged herself up the pole and I let her take me in closer, her legs gripping my neck, knowing that in public she was harmless, giving her a false sense of dominance. She pinned me into a chair and gave me a personal dance, pulling my gun, the one I keep unloaded, out of its holster, pushing the barrel into the underside of my chin. She whispered into my ear with a flick of her tongue on my lobe, "Now what would make me do a thing like that?"

That's when I looked around the club, realized the crowd was missing, was maybe never there. The coffee was weak, the whiskey was dulling me, my partner was dead. It hit me that he was never the target, she killed him to lure me here, to catch me off guard. But I'm never off guard, and when I am, I recover.

I threw her off me. She landed on her back, firing two clicks from the unloaded pistol. I pulled the revolver strapped to my calf, shot, didn't miss. Whoever else was there didn't miss either, but I still made it outside, long enough to leave this message. Don't send help, because I'm dangerous, and I don't want it.

This is it for me, in the same alley I was born and mostly lived.

Robert John Miller's work has recently appeared in Camroc Press Review and AlienSkin Magazine. This is his first piece of crime fiction. You can read more at http://bobsoldout.com/work
Posted by Author at 16:16