ACT OF MERCY By Sue Harding 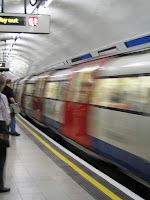 
She left the house right on cue. He’d planned this for weeks. He knew her routine and there she was, right on time. David Palmer watched as she crossed the road and carried on walking. He didn’t want to risk her catching sight of him. He made himself wait and let her get a good way ahead, before he got out of the car to follow her. She looked gorgeous, as usual, her long blond hair catching in the breeze, bouncing along in time to the gentle momentum of her gait.

That’s what made it such a shame. It shouldn’t happen to people like that. Young and vibrant, with everything to live for, the world at their feet. He picked up his speed, keeping her in sight, even though he knew exactly where she was headed. He’d rehearsed this several times but now it was for real. He wanted to be there, to be sure it all played out as he’d anticipated. Exactly as he’d planned.

He rounded the corner a hundred yards or so behind her, dodging between other commuters as he turned onto the busy high street. He singled her out and continued on behind. It was harder to keep her in view, but he wasn’t too worried. He glanced at his watch. There was plenty of time yet. He would already be there. Waiting.

She turned and disappeared along with the early morning throng of commuters, office workers, students, and teenagers on their way to school, heading down into the subterranean vaults of the Underground.

Palmer pushed his way through the oncoming traffic of lemmings heading in the opposite direction, recently disgorged from below, and turned left and down the first flight of steps. He avoided the Subway wrappers and discarded McDonalds packaging, and the remnants of someone’s takeaway meal from the previous night. He didn’t want to make the silly mistake of slipping and hurting himself and then missing out. He needed to be there when it happened. To see. To know that it was done properly. He didn’t want her to suffer unnecessarily.

He pushed his way through the barrier and across the concourse onto the first escalator. There was time to pause and look ahead. She was moving down on the left-hand side, passing by those who were content to stand and enjoy the ride. He stepped out, too, and walked steadily downwards, focusing on her hair, less bright in the artificial light. He watched as she paused and then stepped smartly off and picked up her speed, walking around the corner out of sight.

He ran the last half-dozen steps, skipping over the leveling treads, then followed the signs and turned left into the waiting masses. His eyes darted around, momentarily anxious, yet he knew she could only be a few paces ahead of him. He saw blond hair cascading down over a grey wool coat. It wasn’t her. She’d been wearing black. He searched again through the brunettes, the redheads, the mousey-haired peroxide failures and then he relaxed. She was already stepping onto the downward escalator, dipping out of sight almost as soon as he’d identified her. He waited his turn, shuffling forward, step by step until he felt the slight jolt of the treads carry him forward and then begin to descend.

He locked his eyes on her, pausing to think through what was about to happen. A simple accident. Fatal. Tragic. He knew there would be some who would claim it wasn’t an accident, of course. The family would know. He’d made sure of that. He’d told them and then sworn them to secrecy. Some of them had accepted it fairly straight away, after the initial shock. Others needed more convincing. In the end, love had learned to overcome any distasteful feelings, ready to accept the outcome, ready to almost welcome this act of mercy.

She was so pretty. How could they let that happen to her? How could they watch her change and wither before their eyes, as the cancer ate away at her. Better a swift, ‘accidental death’. They went along with the plan, grieved with him, offering their own strength to carry him through the dark days ahead.

The escalator had reached the bottom, it’s passengers stepping off, turning right, or left, some carrying straight on, each towards their preferred destinations.

Palmer swung off and headed for the southbound platform. He moved along, close to the wall and then he saw the man, up ahead. They exchanged small, knowing nods, acknowledging each others presence, then he looked at the indicator board. The next train was due in two minutes. One hundred and twenty seconds and it would be over. He wondered if he would have one last look at her face, one last smile, one last silent goodbye.

He looked across the sea of bobbing heads in front of him, and saw her fair hair glistening in the fluorescent lights. He took a last glance towards her, hoped it would be quick. She was his wife after all. Another quick glance as the man sidled nearer, until he stood behind her. Palmer felt the slight chill of the air forced out of the tunnel, watched as it flicked up wisps of blond hair. So pretty. Such a shame.

He heard the shrieks and gasps around him, and the scream. He didn’t think it was her voice. At least, he hoped it wasn’t. Moving back as the rest of the crowd surged forwards in morbid fascination, he turned away, retreating back towards the exit, fighting against the latecomers who poured down onto the platform, drawn by the commotion.

He heard the muffled announcement over the P.A.system, but he carried on, walking up the ascending escalator. It was over and he felt a strange sense of loss. She had been so beautiful, but he tried not to think about how she looked now. They had shared just a few brief months of happiness together. A whirlwind romance. A fairytale wedding. And now this.

He remembered the tears in her father’s eyes as he’d told the family about her illness, saying how she’d begged him not to tell them anything, but how he felt they had a right to know. How she’d confided in him her plan to take her own life rather than suffer the ravages of the treatment as well as the cancer itself. How he’d decided to take that burden mercifully from her and had made arrangements for it to happen when she wasn’t expecting it. And then, finally, he’d begged them to carry on as normal and not let on they knew, respecting her decision, pretending everything was OK.

He trudged up the steps and out into the morning light, feeling the fresh air on his skin. There was a new energy about his step as he walked forward and hailed a cab. After all the strain of the last few weeks he was glad it was finally over. There was plenty of time to get to the airport and he relaxed back into the seat.

A couple of months, he thought. He’d let the family know he’d decided he couldn’t face returning to live without her. They would understand, clear the house and sort out the estate for him.

Shame. She was a pretty little thing. Then again, so were some of the others he’d already said goodbye to. Funny how the autopsies never revealed any signs of cancer. But then, he always planned it that way. It never ceased to amaze him how gullible people could be.

He checked the ticket in his wallet and smiled, then lowered the window and tossed the gold band from his finger.


Sue Harding works in a library in Warks. Having spent years 'shelving' books, she's starting to 'write' them instead! Sue blogs here:
http://irefusetogoquietly.blogspot.com/
Posted by Author at 11:52